A trip to some islands in the Venetian Lagoon (Golfo di Venezia) is the regular supply of travel agencies, others are less visited. The advantage has the one, who not travels to Venice by train or bus over the bridge from the mainland of Liberty (Ponta della Liberta), but who prefer the ferry from Punta Sabbioni (way most tourists come from the Venetian resorts on the Riviera). Already on journey to the center of Venice, a boat passes by some of the islands and also the construction of millennium, which is not finished yet - an extensive project called "Messiah" (designation came from the English word Mose, originally expressing an Italian acronym Modulo Sperimentale Elettromeccanico project), which in future would protect Venice from the floods (Acqua alto). 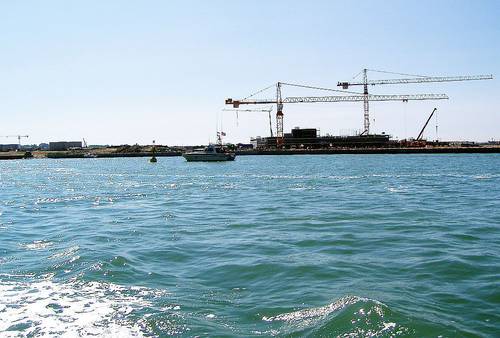 Among the first of islands is showed the edge of the most luxurious of the island of Lido di Venezia, known as the place of the famous festivals and other important cultural events. This island is not only expensive hotels and long sandy beaches, but also a small airport for those who prefer smaller -   preferably his own - a plane. The most famous islands is probably Saint George (Isola di San Giorgio Maggiore), situated directly opposite the Palazzo Ducale, named after the temple of the same name with a typical slender tower. From the other Examples could be the island of St. Lazarus (Isola di San Lazzaro degli Armeni), which was a haven of lepers in the Middle Ages, or the Isle of Torcello. The unique attraction of Venice is an island of San Michele, surrounded by a wall, behind which hides a city cemetery. 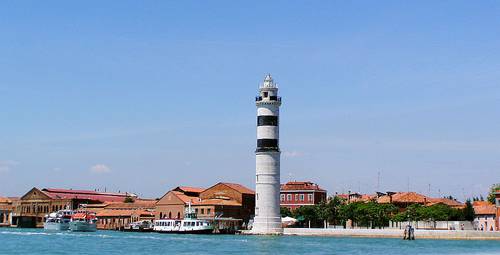 And around this island with the grim fate we are going to one of the most visited islands of Venice - Murano. In connection with Venice in our country we can hear very often the term "Venetian glass" or "Venetian crystal" or "Venetian chandelier." But who visited

the Venetian island of Murano, knows that it is not entirely correct title. Already in the Middle Ages Venetian nobility had decided that in order to protect against the destructive fires, all the glass out of the city was moved to the nearby island of Murano. The first view into the mouth of the

channel intersecting the main island suggests that the greatest glory of a local glass makers have apparently disappeared. Back the white lighthouse factory red walls of bare brick welcomes the visitors.

On the island there are also the churches and residential of former glassblowers, who were forbidden to travel, so they could not divulge the secrets of "Venetian" glass. If someone violated were under threatened

death to not only him, but also his family as powerful Venetian Republic had all their ambassadors. Most tourists, however, goes to the heart of the island, where many glassworks rebuilt into an art galleries and museums, studios and shops with souvenirs, among which prevails glass jewelry, figural sculptures and cups of all shapes and colors.

The Cruise boats (vaporetto) are generally agreed with a glass factory, where they have "service" for tourists, it means where glassmakers are prepared in a dedicated workshop with a hot oven a few masterpieces to show how they are at the end of the blowpipe in their hands a hot glass metal is changing into a cup, mug or glass horse. It is a magnificent show for the visitors, because today they can see process of handmade glass blowers in real glass furnace, where it is gradually displace the automatic machines, very rarely. The show is not long, its aim is mainly lure tourists to the nearby showroom and store at least certainly chose a sparkling souvenir from rare Murano Glass.

Even a short walk around the neighborhood interpretations of what gems and chandeliers and offers competitive vaporetto is waiting for some tourists to them to another island or back to Venice, because as home themselves admits, in addition a glass factories and shops is not much to see on this island. I couldn’t resist to ask the guide where in the past they took so much wood for heating glass furnaces, but also to build ships, buildings and other purposes. He answered my question: “Have you ever been on the Istria and Dalmatian islands?" I understood. 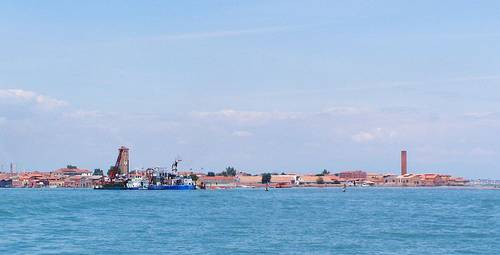