en.infoglobe.cz » Italy, Gargano Peninsula – A Spur of an Italian Shoe

The center of the peninsula is covered with permanently green forests. The highest peaks reach an altitude of 1000 meters. Marked MTB trails go in beautiful nature, pass by olive groves and beautiful beaches. Yet they are recommended to primarily to experienced MT bikers. 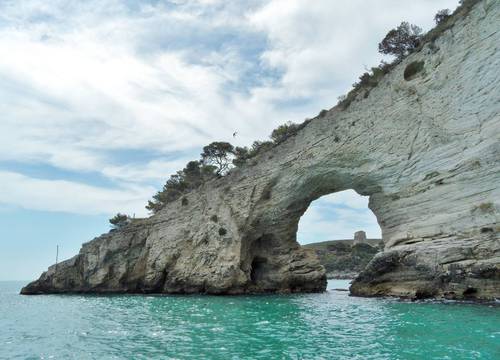 The biggest attraction is diverse and romantic coastline. White up to 50 meters high cliffs hide many nooks and caves and at both of its ends there is a beautiful beach. Sand or pebble stones cover the beaches which slowly enter the sea that is always clear. You don’t search seashells, you pick them up from the sea. In many of its karst caves there are many fossils. Near the coastline, solitaire rock formations, gates, or islands peak from the sea. Like caves, even these formations have poetic names. On cliffs, there are towers from the time of Ottoman raids (16th century). 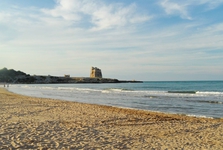 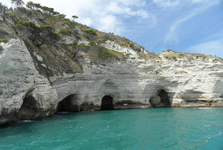 Some beaches are accessible only by boat. On Baia delle Zagare clients of the hotel reach the beach by elevator. 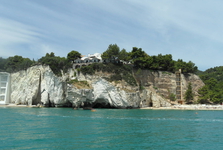 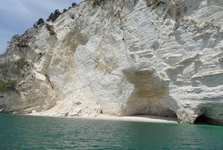 Gargano’s gems are its towns. They were established in the Roman times (for instance Manfredonia). Through the history, these towns were seized by invaders and faced many invasions 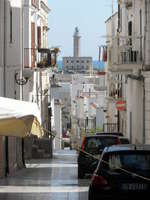 . The worst came with the Turks in the Middle-Ages. Fortified towns in diverse terrain are no open-air museums. Ground floor of the houses serve usually as a shop, or restaurant. Mostly old residents live there. Clothes hangs on the windows, old men gossip on benches, all abide by four-hour (!) siesta. In the middle of Gargano’s coastline there is Vieste, a town of fourteen thousand, established in the 10th century BC. The castle was built on the highest peak and today it is owned by the navy and not open for the public. Right below it, there is a 11th century cathedral, once the residence of the bishop. The center of the town is made of white marble. It is surprising streets are paved with marble as well. The symbol of the town is a lighthouse at its shore. Another symbol is Pizomunno, a rock formation on one of its beaches. The Museum of Seashells is on the seafront. 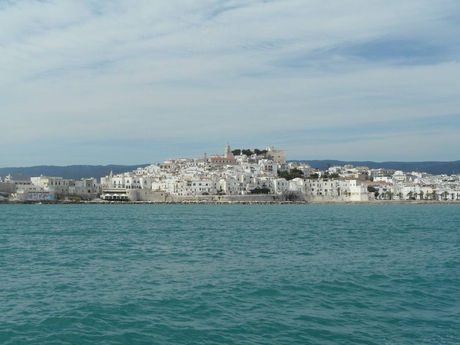 North from Vieste even more picturesque Peschici town is located. Picturesque streets, passes, stairs, and balconies will be pleasure to see. Once, the town was a poor fishermen and farmer settlement. Gargano had lived in traditional way until the 1960s when the tourist industry boomed. It is not hard to believe that seventy years later there was no road. You will think about this when overcoming serpentines at the coastline. 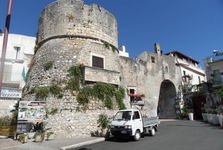 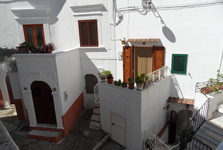 Gargano is not plagued by omnipresent hotels. Most of its beaches are opened to public so you can take a swim on different places every day. Except for the cities we mentioned there are others worth a visit – Mattinata, Monte Sant' Angelo, Vico del Gargano… You will see authentic historical houses, churches, and fortresses everywhere. Be sure to take a boat cruise along the coastline, and caves. Should you prefer hikes then visit the central part of the peninsula. There is a network of trails and cozy rest areas. Summer season begins in mid-May on Garganu and ends at the end of September. However, I recommend to not to go there in the high season which is in August. Italian school children have holidays which means that there are many people everywhere, and prices are also higher.

You won’t be disappointed. Gargano is true paradise!