en.infoglobe.cz » Italy: Venice – When You Got Enough of the Adriatic I 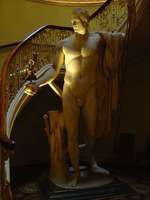 The impressive painting of the Assumption of Virgin Mary by Titian and an altar with Madona di Ca´Pesaro painting or Madona e Santi triptych by Belini, Titian’s mausoleum by A. Canova and Canova’s tombstone. The tombstone was made according to Canova’s drafts by his disciples and friends.

This monumental tombstone in shape of a marble pyramid with a relief of a sculptor in front and with small doors little bit open. It fascinated me and lured me to “come in” and do more research information about life of this author. The tombstone was made according a memorial that Canova made for Maria Christine of Austria, in Vienna. There are allegorical figures of architecture, painting and sculpting. On the other side

there is a Genius leaning against a winged lion, a symbol of Venice.

Soon I found Correr , a Venetian museum and there was a neo-classicist hall. I entered a kingdom of beautiful, white, and naked statues. Their silence was uninterrupted even by neo-classicist furniture and soft artistic decorations. It was in contrast to over-decorated Baroque. The most interesting work is a plastic of Daidalos and Ikaros. I think that Canova depicted his own life experience, he didn’t have a father rising him. There are also many plastics made of clay and drafts, plaster casts and models of well-known works. Orpheus and Eeurydica, a well-known work, and also a model of most dynamic, most rough and most raw Hercules and Lycos sculpture that the author made early in his career.

Antonio Canova was born in Possagna in 1757 below 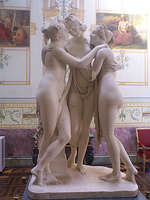 the Venetian Alps. His father died soon and his mother got married again. Small Antonio was raised by his grandfather, a popular sculptor. He recognized Anotnio’s talent very early and first he taught him himself, later with help of benefactors he studied with many famous sculptors. It is clearly visible that he spend a lot of time studying anatomy. Initially he had a small workshop in a monastery, however, his effort made him famous. Soon he received large scholarshipsa and was thus able to open his own workshop. Soon, he was creating works for important figures of the then Europe, monarchs, aristocrats, clerics and even the pope. His works are in Hermitage in Sankt Petersburg (The Three Graces, Amor and Psyche), in Rome in Borghese gallery (Paolina Borghese) and in Dei Santi Apostoli basilica (Papa Clemente XIV), in Florence (Venere Italica), in Berlin (Hebé), and George Wasington statue in the United States and in  other localities.

Published: 26.6.2010
When staying in Ischia, you wish certainly to visit Capri Island by ferry. In past, Capri was a summer seat of August and Caesar Emperors, rulers of Antique Rome. Later, also another famous personalities spent their holidays in Capri, too, such as T. G. Masaryk or Max Gorkij, I. S. Turgenew, local villas were owned by writers A. Munthe or C. Malaparte.