Last time we wrote that you can see an interesting building in Bolzano everywhere.

. Today we take a look at the most important sight of all which is to be found on – Piazza Walther. Why Walther? Walther von der Vogelweide is one of the most important poets of German early Middle Ages. His memorial has been on the square since 1889. The square was built on vineyard in the early 19th century which belonged to a Bavarian noble family. It was then when Bolzano was becoming a popular tourist locality. Every year the square hosts Christmas markets, and in late April/early May flower market. The center of the square is Cathedral of the Assumption of Our Lady.

The cathedral was built in the 14th century by the Schich brothers of Augsburg. Well, they rebuilt the church in the Gothic rvival spirit. They used red sandstone from Val Gardeno and yellow sandstone from South Tyrol. Very valued are gargoyles as they remind those at Notre-Dame, Paris. 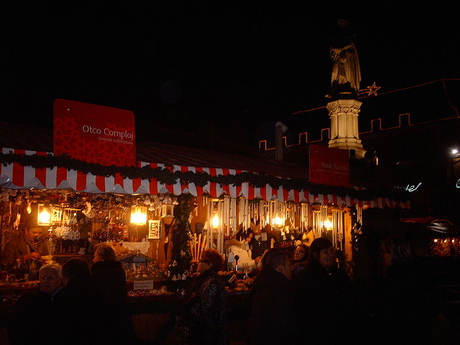 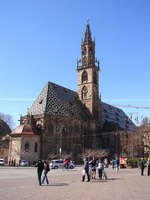 the early 16th century. It was built upon Romanesque foundations. Also, notice a frescoe below the tower. It was made around the year 1400 by, probably, the students of Giotto, an Italian architect and painter who is considered the forerunner of the renaissance.

Among other things, the cathedral hides a treasure. Well, it does hide it per se as it shows it to the visitors in the Treasure Museum. The collection is considered the largest and richest collection of holy medieval relics in Tyrol. One of the most important items is 1,3 m 13kg golden monstrance. The material used is silver with gilded surface. The museum exhibits also gold or silver statues, sculptures, Renaissance bible, robes, frescoes or parchments since the medieval times to the early 19th century. 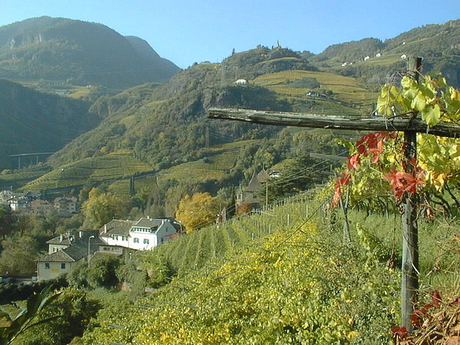 Bolzano and Alpine nature (we will talk about it some other time) create a powerful combination in any season of the year.