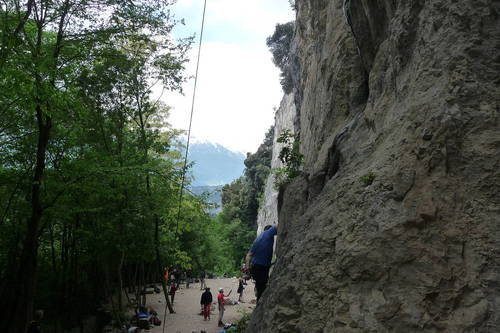 How you may get to this rock formation? From lake you ride from Torbole up to the town of Nago. Locals will gladly guide you to local cemetery where you can leave your car on a parking lot in street and continue to the rock formation in a pleasant walking tempo. It will take you about 20 minutes between vineyards to forest; or you may drive to the forest where a stony pathway begins. Streets between vineyards are narrow and it is really difficult to find the right one for people who are there for the first time. You have to move southeast, there is only one house ruling over vineyards with a small parking on its left side. There begins the stony pathway and don’t be surprised if you meet there some bikers. 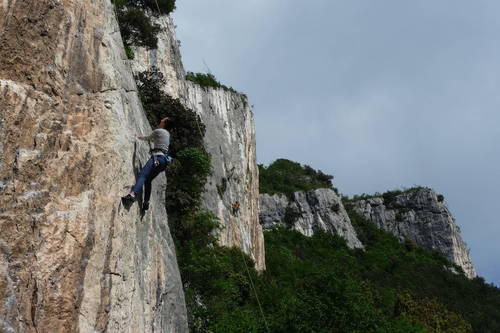 (for walls are up to 30 meters high and it is really not necessary to pull yourself only with arms).

The rock formation is divided to several blocs as you may see on the photographs. It takes about 15 minutes of walk to the lowest bloc from the beginning of the forst. The bloc is not difficult and its proximity makes it a popular destination for families and agencies but not as popular as Belveder, due to its endurance requirements. It is hard to find any free road for beginners and intermediates in the afternoon while more difficult trails – 6c – would be most certainly free. There are so many people in afternoons for the sun doesn’t shine there in mornings and noon. Thus, I recommend to beginners and intermediates to set out there in the morning for an option to try every trail. 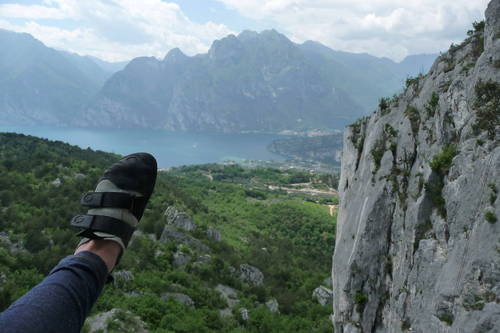 Have you decide to walk on a path along a massive you the number of people you meet will decrease since the trails are more difficult there (mostly 6b – 7c) and not every mountaineer dares to climb 30 meters. Still, there are easier trails (5b, 5c). Being an absolute beginner I enjoyed my hard moments as limestone there is very slippery. This is not the only pitfall, however. The formation itself is situated on a hill and when you move 15 meters higher you might enjoy a splendid view of a lake. People used to climb on artificial walls this is entirely new “level”. It requires lot of courage and you should resist to look at lake and rather focus on climbing. It is a real pleasure. 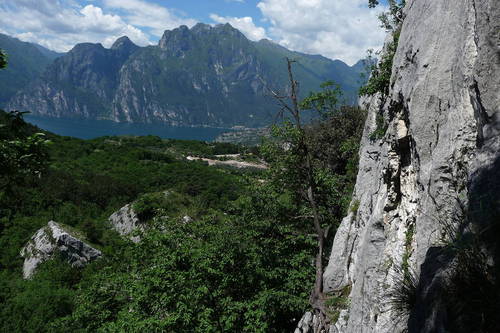 There is not enough place to camp in nature. By the lowest bloc we spotted a fireplace, however, I am not sure if anyone dares to spend a night there. Down in the cities by lake there are many camps, however, as we convinced ourselves it is necessary to book them early. Also, keep in mind that camps are very expensive there.