More than four thousand years known island with fishery tradition that has been there since the Roman empire was of interest to Greek sailors. The Greeks influenced local culture. The island covers an area of 46,5 km². It is only about thirty kilometers away from active volcano of Vesuvius and the island of Capri . The land is citrus tree fertile. You will likely taste some citrus liquors during some expedition. Volcanic activity means that there is about one hundred of mineral springs, sometimes of even 90 °C. This is the main reason why thousands upon thousands of tourists travel on the island every year. You can find there thermal spas in beautiful gardens, or carved into rocks, or in the underground. Other underground spaces have a lot of mud left to mature in mineral springs. Then such mud is used for cosmetic products. One of the main crops is also wine. Volcanic massif is used to store it for cellars are easy to dig there. Blocks of lava were used to built not only human dwellings but also nests for birds. Also, this led to construction of L'Arca resembling a boat. And local specialty? A rabbit ala Ischia (a wild rabbit). 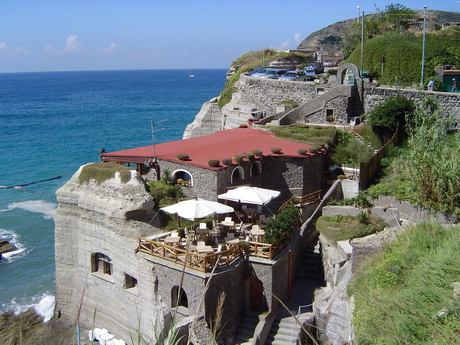 These are two districts of the capital. Porto – a bay was a volcanic lake mere 150 years ago. It is here where the life begins. World famous Excelsior hotel, famous thanks to Hollywood movie "Avanti!" is located by the park, in a silent place. In huge La Mortella garden are to be found plants of five continents, and other interesting flora and buildings. Castello Aragonese - a hard to miss castle was built in the Middle Ages as a refuge before Barbarian rides. It was an unconquerable fortress later used as a prison. Todays shape of the castle is from the 15th century. And at the end of the 15th century, the town Ischia Ponte emerged among fishermen houses. On the way to Forio you pass by an interesting formation known as Fungo (mushroom) decorating the shoreline by the harbor and to be seen on every postcard depicting Lacco Amena. Even there you can find - Negombo. It is the largest town of the west coast. The town used to be referred to as a town with a tower and it guarded the people against pirates. Thanks to early message the people hid in caves or 14 towers. There are 16 churches, all of the Roman-Catholic. Kind of unique is Santa Maria del Soccorso church built in the 13Th century. The church has a chapel and is also depicted in the movie. Its location sparked many metaphors. For sailors it is a white specter between blue color of the skies and heaven, and a warning sign of nearing rocks in the night. In Forio, there is the most popular thermal park on the island - Poseidon’s Gardens (4000 m²). 25 pools under clear sky. Water temperature is between 25 to 40 °C. Architects made a mix of traditional 2000 years old healing methods with modern equipment. Moreover, they inserted it to a volcanic slope. Cascade pools have sometimes massage noozles. You can try also cave saunas, inhalations, Kneipp lakes, mud packs, or boutiques and restaurants. Romantic and the southernmost place – a small island – is joined with the fishermen’s village with y sandy road. The village has become a VIP center to tourism. It is the most beautiful place on the island. Fishermen set sails from there. Today they are yachtsmen or boat taxi. From there you can also get to the thermal springs of Aphrodite. Buildings are constructed in a way not to interrupt natural sceneries and magic of bays. Every hotel has a thermal pool, and sometimes even a balneocenter. Space is really precious there.

When climbing Monte Epomeo (789 m), the highest peak of the island, you will understand why the island’s alias is “green island”. You can rent a mule but it wouldn’t take you to the very top. The volcano is allegedly a residence of gods. Its last eruption in 1301 resulted in southeast part of the island to be flooded with lava. At the place where nymphs were supposed to live, locals found a drinkable thermal spring. From there, enjoy a beautiful vista of the land and the Gulf of Napoli. You can learn about island’s history in Museum Villa Arbusto with very precious Cup of Nestor which is abou 2000 years old. Also, a stone aqueduct from 17th century built in antique style has been preserved. It was used to feed the island with drinking water from mountains. Unfortunately, it is not operating in the present.

And the weather on Ischia? Warm autumn with low precipitations, about 7 °C in winter, and about 35 °C in summer. Most days are sunny, only there are higher precipitations in spring.