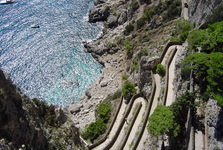 Already on the ferry you can see narrow hairpin bends on which yellow buses full of tourists ride. Traffic here is limited, the priory have only taxis and supply cars. Walking is preferred – due to the size of the island it is not an obstacle to walk there. Despite the fact the island seems to be of volcanic origin, it is not. It emerged by separation from mainland (the Sorrento Peninsula). The island has two parts, i.e. two citie

s: the lower part with Capri begins in the main harbor (Marina Grande) of cruise ships and a touristic center begins above the harbor. The Anacapri town is in the upper part of the island. It is connected with Capri by antique narrow stairs with high steps that are carved into rock. Such a design ensured that during an occupation only one man at once could go on the stairs and thus it made easier to defend the place. Today a bus takes tourists up. The highest peak of the island is Monte Solaro (589 above the sea level). You can get there by walk or by a cable way from Anacapri. Among architectural sights are The Clock Tower – a meeting place of Italian writers – town hall and St Stephen’s Church.

The greatest attraction of the island is a uniqueGrotta Azzura (The Bluce Cave) that you can access on small wooden boats, because the entrance to the cave is very narrow and only one meter high. You can sail into the cave only in windless conditions. The access is limited to one or two persons at once, so your waiting can be long, if you are not lucky. Therefore, we recommend you to visit other colorful cave, e.g. The Green Cave 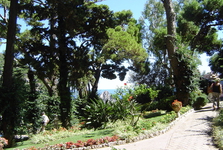 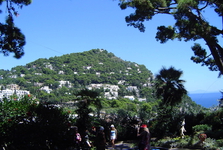 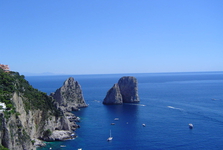 Crooked streets are full of souvenir shops , coffee bars, and shops where they make you a custom perfume or shoes, and can get you to the Gardens of August. These gardens with well-tended flowerbeds, pine trees and blooming trees are named after Augustus, the first emperor of the Roman Empire. Many Italian painters were inspired by the gardens and used them as motive for their paintings. Even Emperor Tiberius beloved this place with a wonderful outlook on open sea and spend here his last years. He also built here several palaces and villas. Above the entrance of one of the palaces is a sign carved in stone: “Welcome in a beautiful city where you needn’t work”. 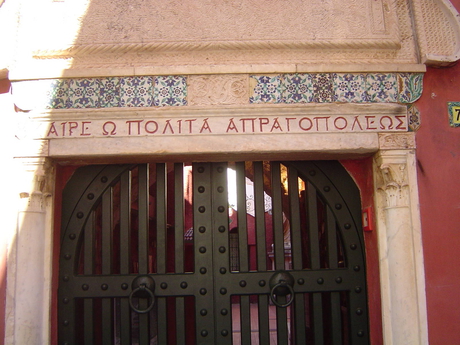