Climbing area are mostly on the northern part of Lake Garda - Valle del Sarca, Arco, Mori and on east Garda, Stallavena, etc. This all is, however, a long story thus I would like to focus just on one area that is designed for beginners and intermediates as well. It is Belvedere - Arco. 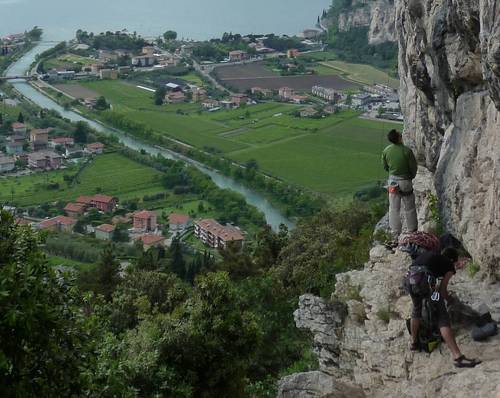 The region of Belvedere is located very close to the lake. At Torbola, on a roundabout, you turn to Nago where you just cant miss red helmets moving along a rock formation (ca. 15 – 20 meters of height) on the left. Just when you enter Nago there is a new free parking used mostly by climbers adjacent to a roundabout (the old parking lot next to the rock formation hadn’t enough capacity). There are 46 perfectly marked trails at Belvedere (every trail has a blue number hanging about one meter above the ground), below the rock there is a guide of the area on a wooden board. This will make your orientation in the area sufficient. At the left half of Belveder, a climber may find very easy trails (3b to 6a difficulty) and, on the right half, there is a rock formation with a overhang that climbers who like 6b+ to 7b+ difficulties will love. 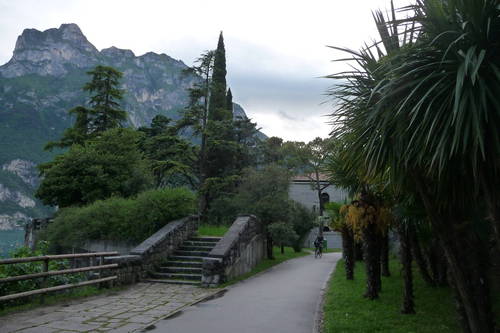 Belvedere is far most lucid climbing region I have ever visited. Its perfect location – a view of a lake and its tributary (the River Sarca), its accessibility, safety and many trails with easier difficulty have, however, its cons. As I have already said, you can find the area thanks to helmets. Its pros make it a popular destination for tourist agencies, families with children who get under your feet, and young people who don’t like sitting at the lake and eating delicious ice-cream any more, but prefer rather an active vacation. Agencies left ropes on trails and they climb in the so-called „top rope“- belaying is on the top, so it is easy for beginners. An agency doesn’t take other into consideration and it has “top-rope” on 10 trails and members of its party rotate. Other climbers thus have no chance to get on these trails. Under this rock formation there are literally fights for every half-quadrate meter. Thus, such a place is very unpleasant and even dangerous, according to me. Despite all of this, you may find even beautiful trails there and a beautiful view of a lake from tops would be the best reward for you. 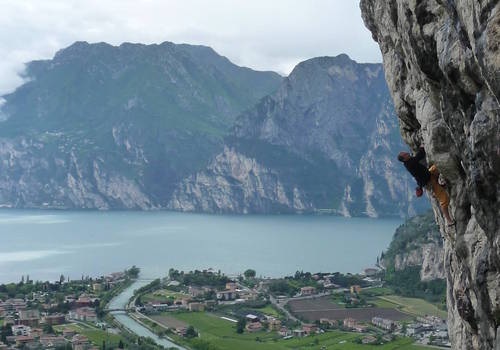 To all beginners I recommend visiting this place. It would be a pleasure for you to climb there, however, plan your stay for afternoon hours (get up early if you have to). Only then you can avoid climbing agencies, which are present there usually from 9:30am to 16pm.