We intended to stay overnight there however, when we had parked on a place that seemed to be suitable for us, we found out it was forbidden to camp there. We walk on a rocky beach at least and we ate ourselves fill with blueberries. There were many bushes overflowing with blueberries near the shore. Soon after we get back into the car we started to look for some place we can stay over night. It didn’t take long and we accomplished our goal and it was a really nice place – pebble beach where were two wooden tables for tourists and a fireplace. So we built a fire and after got dark we sang few songs. We were lazy to build a tent so we just slept in the open-air. Thanks to quite strong wind mosquitos, we were afraid of, didn’t bother us. In the early morning I woke up and admired romantic sunrise. 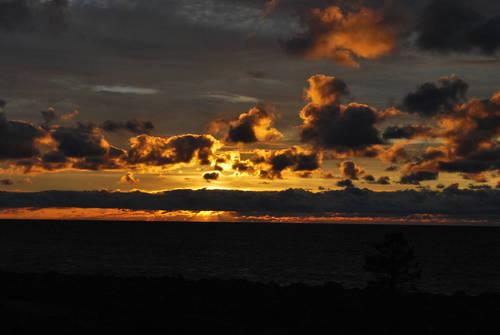 We were not in hurry this time. We made our breakfast on fire, oatmeal with dried fruits and in forest we ate some more blueberries than we reorganized stuffs in our car. We did it quite often on our journey, almost every day. When we finally set out we directed our vehicle to the Skuleskogen National Park . Near the park a heavy rain started and till we managed to ran over to an infocenter we got soaked. In the infocenter we had learned there are several cottages available for free for tourists who want to stay overnight. In every cottage there are several beds and, if there had been no free bed left for us we would sleep on floor. The lady at the infocenter gave as also a map and suggested several tracks we can made use of while on our two-day trip in Skuleskogen. 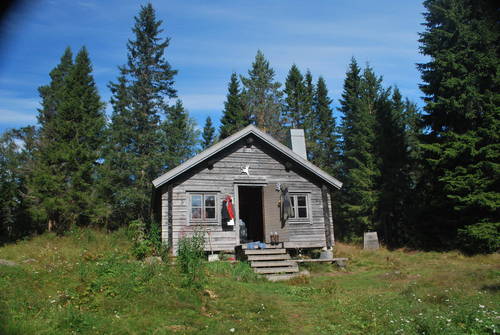 The National Park was only few meters from the infocenter. We got there, parked our car and moved under a small roof of something that had to be toilets once. We ate and watched the rain. No one of us wanted to walk in this kind of weather. If there hadn’t been Tom who gave us a command to go, we would still sit there today.

So we put on our backs and moved off to the rain. We walked almost two hours and were not bothered that much with the fact we were wet. We reached a beautiful cottage after that time. There was a sign on its façade saying: Norrsvedjebodarna and there an antler hanging above the sign. Inside we found a room with a plank-bed, table and stove. There were another two smaller bedrooms. I was very excited about the cottage; it reminded me of Canada I dreamt of. A great thing was that we were alone there. We take off our wet clothes, hung it all around the room and put the heating on. After supper we laid in beds and immediately felt asleep. It about half past nine pm… 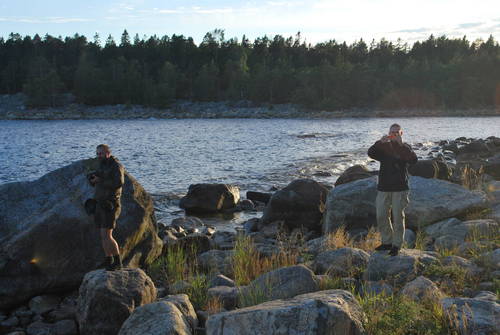