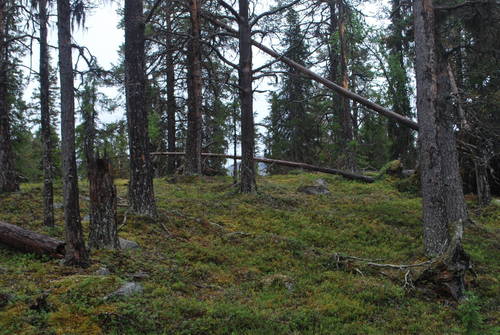 When were leaving it was still raining. It wasn’t heavy rain and soon it ceased. We moved to Kungsleden to a bridge behind which we turned to a forest, accoding to Magda’s advice, and then continued on along a low-quality Sami road. From time to time the road disappeared and we orientated ourselves by Sami markings, i.e. trees that peeled bark. We walked in a beautiful forest, which was gradually thinning out and eventually disappeared. Terrain was passable. Milan found first reindeer antlers. We had seen herds of reindeers running around us. They were more curious about us then we about them. We took out our binoculars and observed as they ran with heads leaning forwards and observing us. Sun wasn’t shining but it wasn’t raining either and there was a blue line on horizon. Maybe a promise of better weather? Or not? 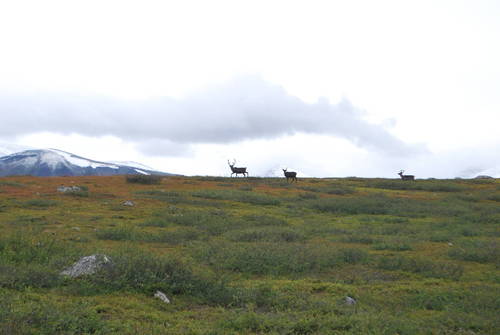 We reached the lakes Magda told us about the other day. Somewhere around here we planned to set up a camp that would serve as a starting point for one-day treks. The first trek we devoted to a visit of beautiful Rapadalen Valley, the largest valley in Sarek. Its length is 35 kilometers. The second trek was intended to reach the closest glacier our map was showing us. We wouldn’t manage to see more in the time we had. 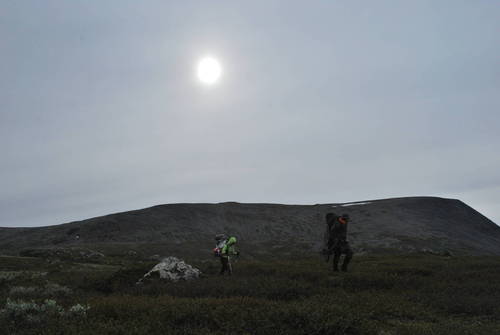 Finding a suitable place for tents wasn’t particularly easy task. The wind was so strong and soil so wet it was simply impossible to set up a camp. After while of walking around the lake Milan found a place in the lee behind a hill. There was a yellow-red gloom on the horizon. We set up a camp, made a supper and looked forward to bright tomorrows.

The morning was actually sunny. Who would get up the hill that shielded us from wind, had a beautiful view over the mountains we wanted to get close to. What we didn’t notice were clouds that was forming in the sky and slowly falling off until it was surrounding mountain peaks. Before we had our breakfast and moved off, the Sun was gone. 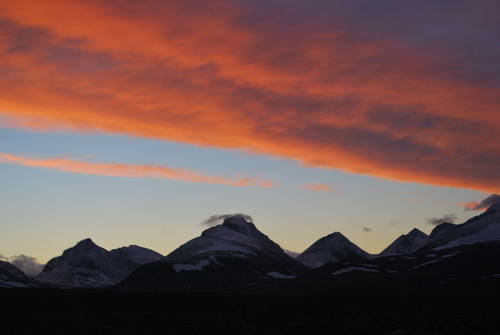 For this day we chose the Rapadalen road as we wouldn’t see the glacier in this cloudy weather. According to the map, we had to get across the Gådokjåhka River and for that matter we would cross a certain bridge. If we had tried to cross the river without going across the bridge, it would be very dangerous. As had learned in the brochures before our departure to Scandinavia the greatest threat represented fording rivers in Sarek. Few people died in the Gådokjåhka River doing so. However, crossing the bridge was a detour and it was a longer detour than we expected. While we walked through marshlands clouds were getting lower and when we finally reached the bridge decorated with mighty antlers, fog was already surrounding us. But the river’s valley was beautiful, it was worth seeing it. 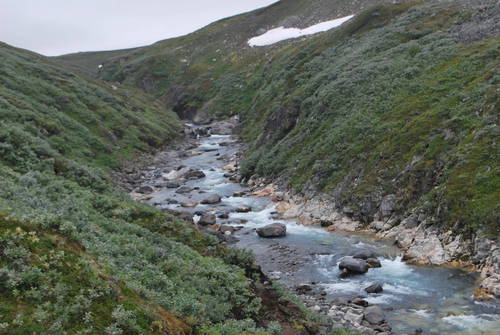 Except a thick fog it was also very late. Thus we decided, and we were not happy about it, to turn back and return to our tents. We were sorry we had to abandon the goal for this day, however, it seemed as a reasonable decision. Not even a return to our camp was easy. We had to use our compasses and GPS quite often. The hill, we thought during our leave from the camp, is a great prominent landmark for our orientation, wasn’t even visible in that fog. Eventually, we reached our tents. 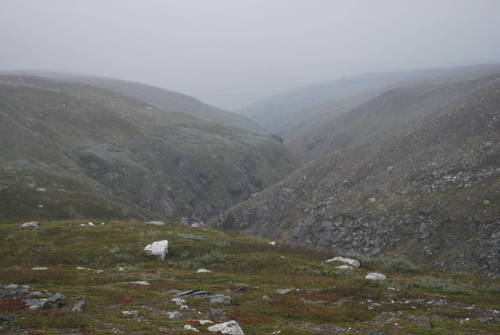