After we parted with Lago di Garda, about 160 kilometre crossing waited for us, 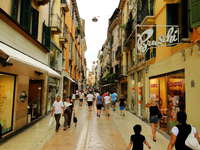 during which was scheduled at least a short stop in Verona, about which we have written on our site few times (Verona Arena, Italy once, again Italy!).

What to say about Verona, the city of lovers so that we do not repeat. Gateway of Northern Italy and the capital of the province, located in the Italy lowlands is use to be often rightly called the city of art, or as the "city of love". Few people in connection with this city not recall the dramatic legend of unrequited love as described by Shakespeare in his famous drama of Romeo and Juliet. 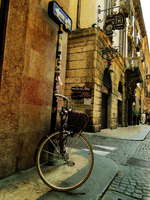 hundreds of cultural, architectural and romantic treats mostly in the form of monuments from the Roman Empire through the Renaissance grandeur. Place inhabited by Gallic, Russian and Etruscan tribes at the time of the first century BC, soon came under Roman administration, which has increased its importance mainly to the northern trade routes. Porta dei Borsari and Porta dei Leoni still define the southern boundary of the former inner city. In the north, then was built an extensive military fortifications dating back to the foot of Colle S. Pietro mountain.

In 4th century, during the reign of Emperor Galliano city's borders was moved again and part of the new walls became the monumental amphitheatre. Even this defence system could not stop the city from invasion and subsequent domination Ostrogot lords of the north. From 6th of century, the domination flowed transalpine between Italy and Germany, respectively Frankish empire.

In the 14th of century Verona again came under the administration of the Italian royal family Scaliger who, with the strong support of the Venetian Republic, made th 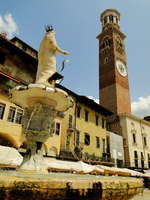 e city impregnable fortress. At the beginning of the 19th century, however, for more than 50 years, Verona became the property of the Austrian monarchy, and together with the towns of Peschiera - Mantua and Legnano created the famous defensive quadrangle. Since 1866 Verona is the pure Italian city.

As the centre of the city can be best described Piazza delle Erbe, which is a scene from the Middle Ages fruit and vegetable markets. The square and the surrounding streets busy now serves as a venue to rest and relax over a cup of excellent coffee. The best view of the whole Verona is undoubtedly the city tower, 83 meters high. Piazza dei Signori find Dante monument of 1865. Breaking down the all famous corners, balustrades, frescoes and palatial houses after all it would take just a little more space, so we will focus only on those really him. Undoubtedly the most beautiful building is the Loggia del Consiglio (literally means loggia of the Board), early Renaissance work from 1493, decorated with statues of important Verona inhabitant from period of antiquity.

If you visit Verona in the summer, maybe you come to the local amphitheatre in Piazza Bra, 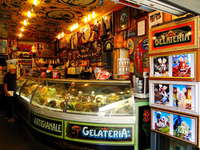 which has been held for traditional opera festival. And if you are a lover of white wine, then you should know that the path between Lago di Garda and Verona famous through the region Veneto, northern paradise winemakers, whose centre is the picturesque town of Soave, home of the same variety, mostly dry wines.

pace under the balcony, where he professed his love for Romeo and Juliet. The relatively inconspicuous entrance to one of the many courtyards alerts you to suspicious mob of tourists. The very big deal balcony excel, insofar therefore ye lovers of Renaissance drama and an incorrigible romantic. Perhaps the most interesting seems to be the very entrance, or entrance to a small area it. Bubblegum unique decoration along with thousands of overlapping signs, creed and 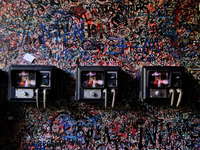 Motorists will appreciate the excellent accessibility of the city from one of the available car parks and ice cream lovers definitely should not miss any of the historic shops with this traditional Italian delicacies, which in hot summer days never disappointed with the price or offered quality that there is literally perfect.

Next part will devoted to evening walk around Venice and tips on interesting in the vicinity of ​​this island city.