en.infoglobe.cz » Morocco: The Magic of the Orient III – Fez, Meknes and Marakesh

Another stop is the royal palace with seven gates. The number symbolizes the days in the week. Next to the palace, there is Mellah Jewish quarter. I admire amazing Andalusian-style balcony. There are still many vendors selling here many things.

Today we travel to Meknes founded by Moulay Ismali. It was a horrible tyrant. He even said that his subjects were nothing but rats. Still, he was quite a skillful ruler and he wanted to reach the heights of his contemporary, Louis XIV. He asked his daughters to marry him yet he was declined. What could have Louis' daughter think of the possibility that she would became another member of sultan's harem. However, instead of his daughter, Louis sent him a clock which pleased the sultan. He had a number of stables with beautiful stallions. True Berber. He founded the city of Meknes and Al Mansur, an astonishing gate. Gates were symbol of prosperity and wealth of a city. That's why sultans paid so much attention to building them. 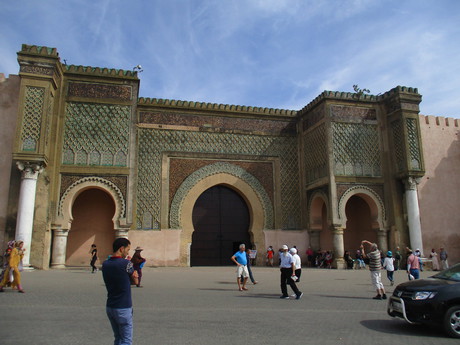 Upon our tour in Meknes, we have a long journey to Marrakesh ahead of us. The city is called the pearl of the south. The landscape changes swiftly under us as we travel across little villages or vast forests of  cork-trees. Further odwn the road, the forests consists of eucalyptus trees creating cool shadows. Such trees improve bad soil in 20 years so much that you can plant anything in it. After that there is wasteland. People plant there prickly pears because nothing else can grow in this sun dryed land. Furhter down the road, we spot the Atlas mountains and deep valleys of blossoming oleanders. Several hours later, we enter Beni Melah and take a 20 in a beautiful garden up on the hill behind the town. 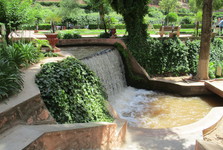 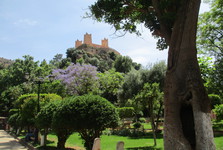 I see first groups of palms from my window. The color of sand changed from yellow gold to red-pinkish. This is a clear sign that we are approaching our destination. The 12 kilometer fortification wall is made of trampled down clay. The wall is 9 meters high with the width of 2 meters. This beautiful oasis includes 100 date palms and it feels like it has been waiting for us with open hands to welcome us, pilgrims. There are over 200 caravanserais – hotels for caravans. These cannot be sold to private persons for individuals could earn some cash. Finally, changes to a green oasis. Therefore, mosque here make an image of a marbel oasis with columns replacing palms. Here, in this oasis, everybody hurries up to Square of the Dead. This is the heart of traditional Marrakesh and the soul of Morocco's storytelling. Here, among all jugglers, fire eaters, and acrobats one quickly forgets about all the hardship in desert. I imagine spikes with imapled heads of dead troublemakers which used to "decorate" the square. By this measure, the sultan forced his subjects into obedience. And by this measure he tamed the free  souls of the Berbers.