So, I was not too surprisesd when we entered the camp, we saw a group of Israeli soldiers, taking photos in front of entry gate. They swung with white-blue flag with Jewish star. An just close to them, a group of German tourists passed by. However, we met also the Germans who were shouting and a piety of such place was not kept enough.

One Oven only Reminds a Million of Murdered and Cremated Prisoners.

In Auschwitz I. concentration camp is „only“ one gas chamber and incinerator. When we went through gas chamber, where the prisoners were killed by Cyclone „B“, so a piety ceremony was taken place. Young people, probably from Israel, held by hands each other in a circle, singing. Everywhere you could see wreaths and burning candles. Just close to gas chamber, you can see cremation ovens, where daily at least 340 human bodies were burnt. 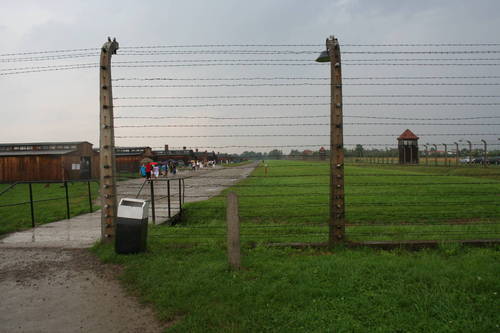 So, this crematorium was in operation since 1940 till 1943. Its capacity was too small, so the Germans constructed in newly built Brzezinka Concentration Camp four great gas chambers and cremation ovens, where most of prisoners died inside. According to data of the company, which built all five crematories, approx. 4576 dead human bodies were cremated there.

Gas chambers and cremation ovens, which were constructed in Brzezinka, were demolished by Germans before the war was terminated, so that only the ruins remaine there. So, one gas chamber and one oven in basic camp in Oswiecim remained, as the only evidence of final solution of Jewish question.

Auschwitz II.: a Place where the Hell must start:

When you pass through the whole area of Oswiecim base camp, you are of the opinion that you cannot see anything worse, but you have to calculate with a fact that you are wrong. The worst is waiting for you. You take a bus, and the vehicle brings you within ten minutes into a camp, named by Germans as Auschwitz II. -Birkenau. This is the greatest part of this concentration camp, with a capacity for 90 thousands of prisoners.

This part of a camp was consisted of wooden buildings. However, only a fragment of constructions was preserved till now. Railway branch-line and a platform form the central point of this locality. Here, the prisoners who arrived there, were selected. Some went directly to gas-crematorium, some of them to the camp, where they worked for couple of months, in order to die at all, as a consequence of exhaustion or of hunger, similarly as countless number of persons before. Even children barracks were there, where the kids of prisoners lived. 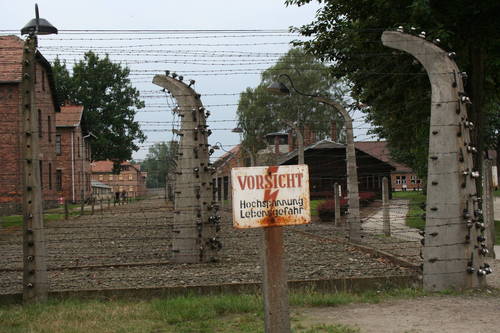 The guide brought us there just at the finish, and, frankly speaking, such horror would be very difficult to be absorbed. You pass all these buildings, where thousands of people died, listening the explanation, unable to think. The brain puts aside all received information only.

Moreover, it exists a certain stage of sympathy and fright, unable to be accepted with your sense. I cannot imagine at all how the people could survive there. You see a mud everywhere, the toilete could be used according to the order only, and everybody was forced to relieve their nature within a minute. The lavatories were very gruff and very often out of order.

So, the people lived there in mud among rats. They were forced to work every day, and when they were ill, so they died, without any help. And as a result only bunch of hair remained, maybe also some photo or a luggage with a name and return address.