en.infoglobe.cz » Vietnam, Hue: The River and the Sea

The bridge was completed in 1899 and was designed by A. G. Eiffel. Damaged in 1904 the bridge was renovated two years later and its wooden surface was replaced by concrete. In 1937, the bridge was extended to be able to serve also pedestrians and bikers. However, the bridge saw other dramatic moments. Part of the bridge crumbled one year after the WWII during the fights with France. It was renovated only seven years later. Today many lights line the bridge and it partially resembles the other, more famous work of its creator – the Eiffel Tower . Many more bridges cross the Perfumer River. None is that famous and admired, however. 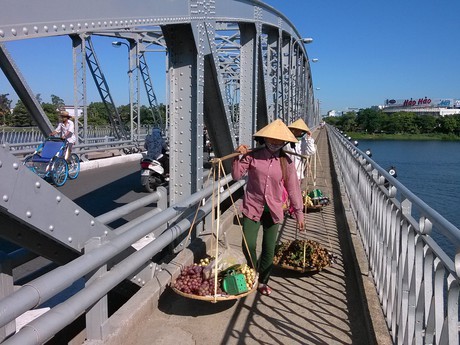 We left the bridge for another important landmark in Hue - Thiên Mụ pagoda. 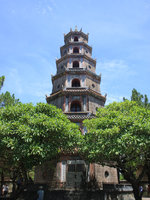 Its seven stores (21 meters of height) make it the highest religious building in Vietnam. Also, it is somewhat of an unofficial symbol of the imperial city. Pagoda was built in the early 17th century. There were many renovations and additions. For instance, in 1710 a bell was installed into its tower. They say you can hear the bell within a 10 kilometer radius. Quite famous, in a sad way, is a car on display here. It is the car of Thích Quảng Đức, a monk who combusted himself to raise attention towards persecutions of Buddhist monks.

Pagoda is still a lively place. People come here to chat, pray, or exercise. We left them to their own maters and set off for one last trip in Hue – to the sea. 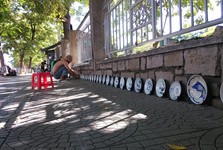 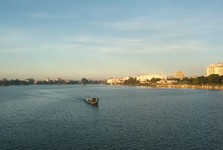 We had great baguettes with eggs and other stuff for a snack. We continued on our way on a bike rented at the hostel. Once we reached the beach locals had been already going home. Therefore, we had the entire beach just for ourselves. A stray dog came to us and fishermen gave us curious looks. The sea was warm. And the air temperature was finally bearable. 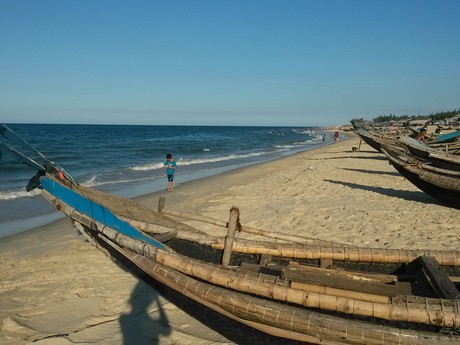 It was time to leave the imperial city. Next stop was – Hanoi – already waiting for us.