You can arrive by car, bus (about 380 kms from Istanbul) or aboard of some boat cruise. Before entering the compound, prepare to be slowed down by “vendors”. They try to sell you all things possible and also hats, a thing you might find useful as there are not that many shades. 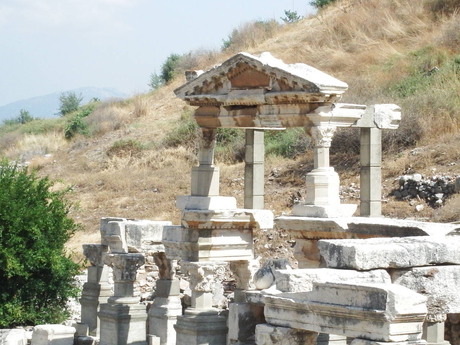 Also, “aboriginals” is a thing you would note right at the entrance – by them we mean cats that have not much to eat or drink but sometimes tourists throw something in their way. They say that the Efesians returned in the form of cats and they refuse to leave their city. Well, who knows…

Majority of visitors walk along the main boulevard towards the famous Celsus Library that was dug out in the 19th century as the first landmark in Efes. Originally, this edifice was a tomb, however, it was a library at the same time. It held about 12 thousand scriptures. Austrians renovated the library and rebuilt it in its former glory. There are even many stone blocks with inscriptions in German. And also glass tables where details on renovation are carved in (also in German). Today, one can consider it bit rude but then it was normal, probably. 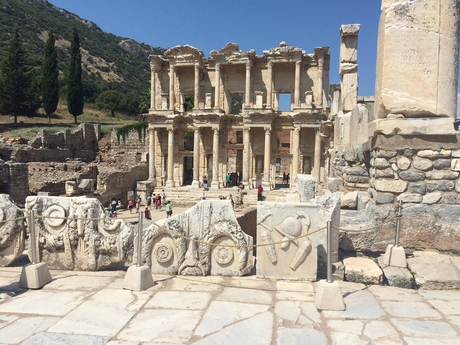 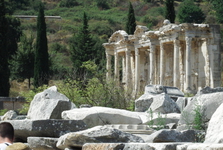 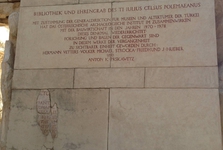 The Temple of Hadrian is another interesting landmark. It was built in the years 117-118 B.C.E. When discovered in the mid-20th century, the temple was renovated upon what was left. The rest was the matter of complex renovation. Czechs also took part in it. This edifice is precisely remade, one would say it doesn’t even fit in here. 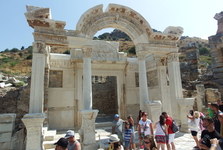 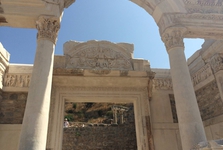 Terraced houses are also very popular. They hold beautiful frescoes and mosaics which were the sign of luxury in the city. These are covered with a massive construction 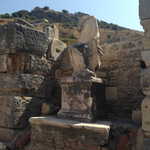 To see them you need to pay about 15 TL first. Also, you can visit the spa with possibly the first roofed toilets and also canalization. The spa are made of marble. The statue of Scholastics guards them. As other statues in Efes, even this one is headless. They had precious gems instead of eyes and some thieves stole them eventually.

While going to the Grand Theater note a foot print, once it was a mark of a brothel. The amphitheater is in great shape with room for 25 thousand people. In case you are lucky, you can hear a talented singer. Then you will enjoy the theater completely. Once you leave the theater through narrow you will note places where gladiators and other performers used. 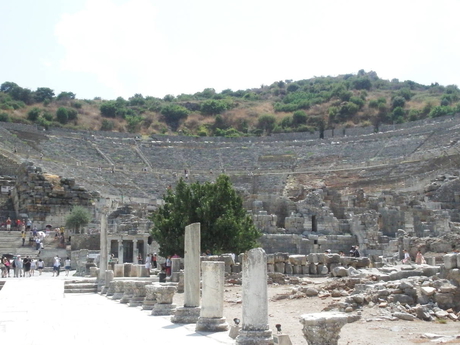 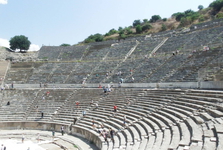 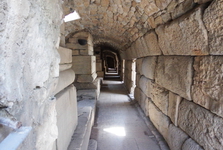 You go on the other side of the compound if you go towards the exit. As the sea surface went lower, the trade was less and many left the city. 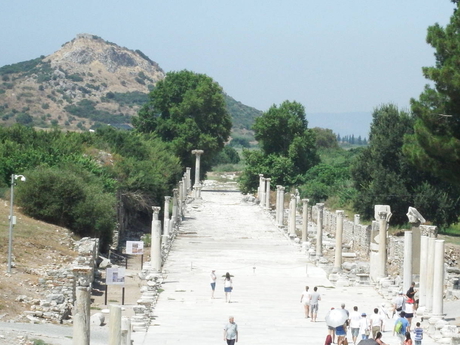 We wouldn’t conclude our trip without adding icing on the cake. Near the compound (towards the town of Selçuk) there is the Temple of Artemis (well, what is left of it) – once one of the seven wonders of the world. In 356 B.C.E., Herostratus (a young man that wanted to make history) started the fire which burned down the temple. On its place, a new temple was built, however, once Christianity came it lost its importance. They say, the temple was about 115 long and 55 wide. Originally, more than 120 18-meter Ionic columns were there. Only one has been preserved until the present. Inside, the 15-meter Artemis statue stood. 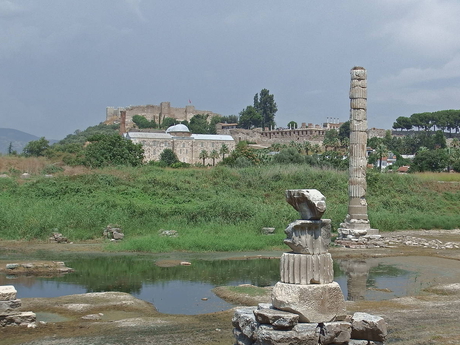 You will like Efes, that’s for sure. I recommend you to travel there off season for the temperature rises above 40 degrees in summer, not ideal if you want to visit the landmarks.