Our point of start was Bukova village near the county capital of Trnava. The most distinct feature of this village is a water reservoir. Mostly in summer it is a popular place to spend some free time at or catch some fish. Another thing about this village is church of the Virgin Mary Visitation, or a chapel. The greatest attraction in the area is, however, the protected nature area of the Male Karpaty. A green tourist trail goes from there. It should take about an hour and half to get to the ruin of Ostry Kamen castle. Another option is to start your tour at Plavecky Peter, Plavecky Mikulas or Smolenice. However, all the alternatives require more physical fitness. 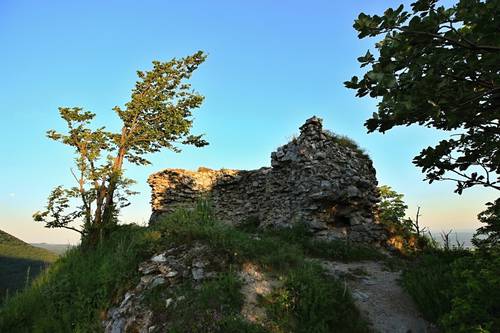 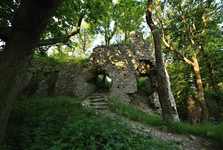 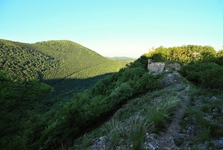 Once we finished a small tour in Bukova then we set off following the green tourist trail. It got us at the crossroad. There we joined a red trail getting off it about half-an-hour later. We stood at quite a steep hill Zarub (510 m) which is a constituent part of the Male Karpaty’s tallest peak (Zaruby summit is at 768 meters above the sea level). We got to a stone wall rising from diverse bedrock. Vegetation was abundant around the ruin. Still, we recognized what once were palaces, archery, or jambs. Training climbing wall is another thing we saw at castle’s lower area. 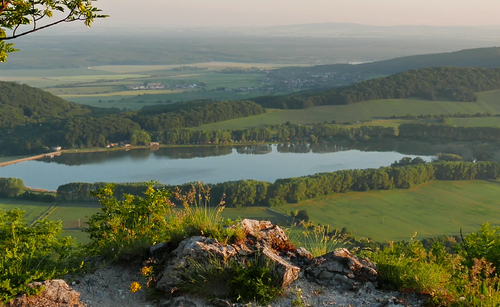 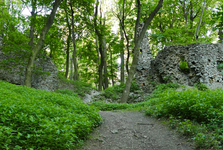 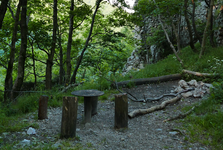 We had urge to learn something on the history of . the castle. The castle has also a moat dug into the rock

as another defense perimeter. Within castle’s compound there was a prismatic watch tower, corner towers, and other structures including a palace. At the castle’s frontyard there were mostly farm buildings and a chapel. What surprised us was the fact about a forward positioned watchtower on the ridge. From there you could see Plavecky castle , Korlatka or Branc. The prupose of this 13th century castle was to guard the western borderline of then Hungarian empire. First a royal possession it later had more owners. In 1704, the Rakoczi insurgents clashed with the royal army. As a result, the castle was heavily damaged. When the route of the Bohemian Road (a historical route from Prague to Budin, what is Budapest today) changed the castle started to decay. The Palffys became castle’s owners in the end of the 18th century. They moved their residence to Moravsky Svaty Jan thus Ostry Kamen has been abandoned since. 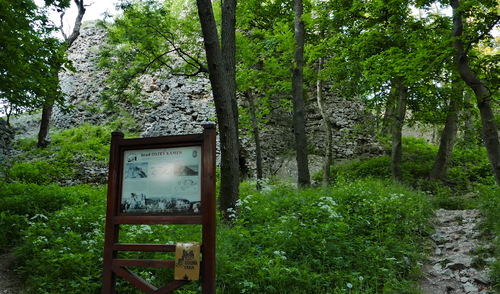 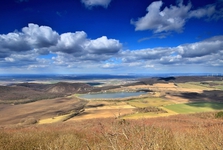 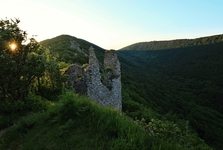 Treetops only occasionally get into you line of sight. An information panel there tells something on its history. There are trashbins, fireplaces and tables to it. We even discovered a castle book. We got entirely new perspective of the landscape below when it was getting dark for we set off late. Towns dotted the darkness. It was fantastic. Less fantastic was our descend from the summit but fortunately our headlights and great GPS got us to the place from where we set off. 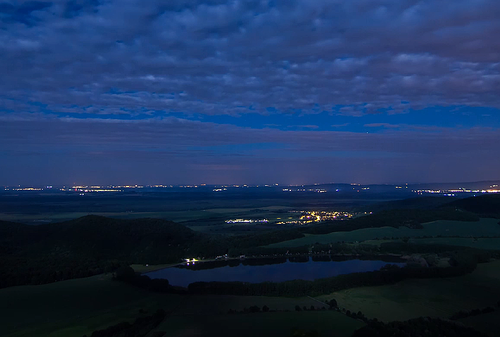 Even steep climb make the trip great for everybody, children included, who love history and mountains. Especially towards the end of the hike it is great. Therefore, hesitate no more and go.

SK, Buková – A Town in Nature

At the bottom of the distinctive Bukovská basin is the village of Buková, attracting tourists to ...