The first and the "real" railway from Poprad to Smokovec started to build in 1906 and a year later was also completed. It was replace by technical unique "electric track without rails" on which we said in the previous article, and so called omnibuses that ran the track between 1904 and 1905. Omnibuses were called Tatra trolley. Under the Tatry ran three trolleys - type Daimler - Stoll. Ran almost two years and could carry up to 20 people. Unfortunately, due to frequent breakdowns and technical problems especially in winter their operation was stopped. But let´s go back to the "new" railway. It was founded by known Poprad businessmen Matějka and Krieger. Their intention was to build a railway line about 1 meter gauge rails, connecting the Starý Smokovec and Poprad. It should be fully electrified under voltage 550 V. As we already wrote above, their plan was successful, but due to delays from ministry was the railway throughout its length (13.6 km) opened in late 1908. 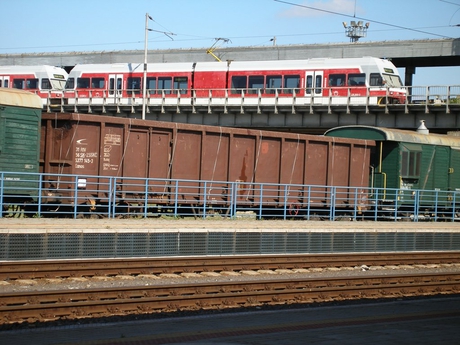 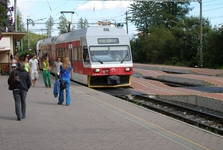 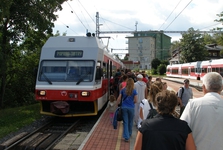 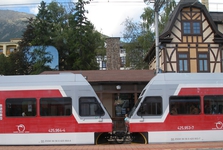 In less than three years (1911) people started to go over old Smokovec to Tatranská Lomnica and thence to Tatranská Polianka. For the last and most difficult part, to the settlement of Štrbské Pleso, the railway was brought up in mid-summer 1912. In addition to personal passenger railway was gradually used to transport cargo in the form of coal, bricks, cement etc... Therefore, in this time of economic boom vividly considered for further building and connecting routes between major cities. Unfortunately, these efforts slowed down and literally stopped the First World War. It is interesting that in the years 1923 and 1924 for the first time railway traffic operated without restrictions during the winter, thanks for snow plows, with those the trains were equipped. In the 30th of last century under the Tatry were ran first Czechoslovak trains and in 40th years has been railways nationalized due to political decisions. At first fell into the hands of the Czechoslovak Railways and in 1992 came under the administration of the Slovak Railways. Let´s call it the state privatization, which brought fleet renewal. But recovery wasn´t easy. First, in the 50th, came vehicles M49.0, but these had a lots of problems, so therefore is in the 60th years were replace three-part series set EMU 89.0. Thanks to the World Cup of skiing ran from 1965 to 1969 extensive reconstruction and from the 70th years served only railroad passenger service. In the next 15 years to the fleet were added are two locomotives made by Soviet Union. Recent changes took place at the turn of the millennium, when the renowned consortium won the tender Stadler-Adtranz, which gradually replaced the original train set, new, type 425.95. They were made in Vrútky under Swiss license. Currently Tatra electric railway supplied voltage 1500 V, which is almost three times more compared to the past. 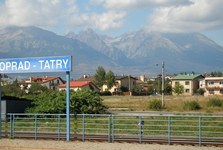 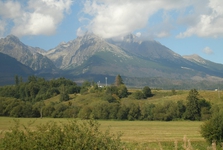 Going by Tatra Electric Railway is a great experience for everybody. Beauty of surrounding Tatra nature observed for windows train is breathtaking. From the wooded part of the train suddenly moves to the precipice, where the magnificent view of the open area under mountain on one side and the mighty Tatra peaks on the other. Rail is tested every year in the form of natural forces of wind and snow and still resists and faithfully serves both domestic and visitors from other parts of Slovakia or the world.