After a hours long ride in a bumping train, we get off the train in Pwin U Lwin, a town with colonial architecture. It is situated at 1000 meters above sea level 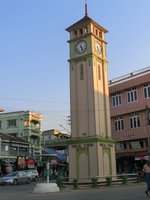 at the Shan Hills. The town is about 67 kilometers east from Mandalay. It is the main crossroads on the road from Mandalay to Lashia and then to the neighboring country of China. The name Pwin U Lwin came to existence in 1887. Until then the town had been simply known as Maymyo.

It takes around 10 minutes to reach downtown by walk starting at the train station. Once you find yourselves at Purcell Tower you have arrived at your destination. The Purcell Tower has a twin tower in Cape Town. Both towers were built to resemble the Big Ben of London. Queen Victoria initiated the construction of both twin towers situated in different countries.

Visit a botanical garden in the morning horus. What shall be your ride? "What about a motorbike?", thinks Tereza out loud. Our sights meet and then we look into the busy streets without an answer. Yet we are lucky to stop several motorbikes which have just arrived. Some while later we sit on Simsons heading for the botanical garden. 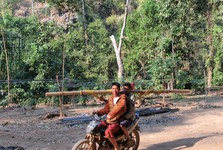 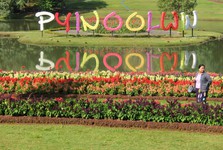 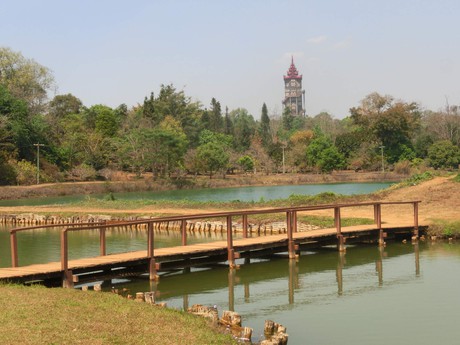 The garden was founded by Colonel May in 1917. 4000 Turkish POWs constructed a 100-hecatr compound where many plants and flowers grow. Foreigners pay 5 dollars to enter. Most of the money is directed to the park's maintanence. Right at the start, you can see amazing flowers of all shapes and sizes. Don't forget to walk across bushland. There 70 species of green and yellow bamboo grow. An orchid zone with two-colored orchids is another interestin place. Parrot aviaries are easy to find thanks to noise. I recommend you to climb up the tower in the middle of the compound. It will provide you with a beautiful view over colorful flowers and black swans. 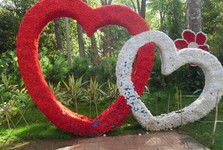 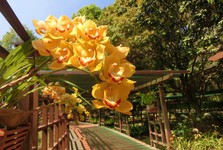 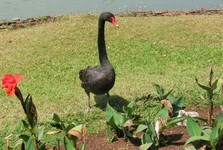 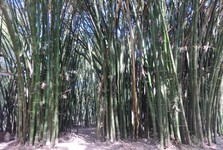 The noon meant also the peak of heat. We and our Burmese drivers move on our two-wheeled vehicels to wild Anisakan waterfalls, as recommended by the local inhabitants. The waterfalls are just 8 kilometers away from Pwin U Lwin (to Mandalay). We are served rice at half-collapsed hut. Then we move on foot along serpentines to the water. The 210-meter waterfall is a great place to take a swim or jump in off rocks. A yellow-red-green rainbow appeared above the water surface. We are there alone. No tourist around. To make our experience even better, we buy a yellow melon at a stall with chickens running around. The vendor brought the melon form his own garden. 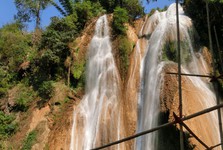 Once the sun was set, we moved to our drivers waiting for us. It takes us 50 minutes to climb up dusty road from the waterfalls. Occassionally a puppy or two join us on our way. We put on helmets and set off to Pwin U Lwin. We are going to move on on the following day. Where to? Well, it is a surprise.