en.infoglobe.cz » Myanmar: The Land of Many Faces XI – Chaungtha and Ngwe Saung Beaches

We have spent three weeks travelling. We spent the last days on white sand beaches. We booked a night bus from Lake Inle to Yangon. We set off at 6.30 p.m. and arrived on the following day at 3.35 a.m. 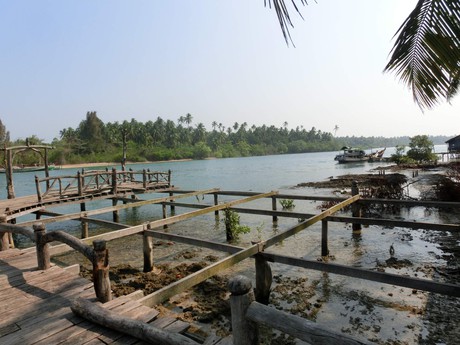 Burmese breakfast time. Tea with sweet condensed milk and warm fried donuts make us stronger for the ride to Yangon-Pathein. We sett of from the capital of Ynagon at 7 in the morning. We reached Pathein, a musilm town an hour later. It is only about 50 kilometers to Ngwe Saung beach from there. However, you need to take many road turns and hilly terrain into account. 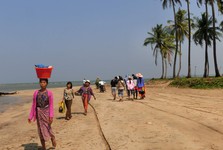 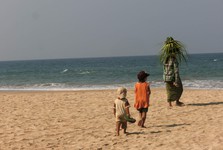 Ngwe Saung Beach is alternatively known as the "silver beach". It is true paradise for idling. The government opened a 14-kilometer beach section in 2000. I recommend you to book some accommodation in advance because there is not a large selection at the place. It is a good idea to pay a bit more and book a bungalow standing closest to the sea.

Ngwe Saung is a quiet place. You can hear only light breeze in the night and fizzing of the sea. It is amazing to just walk odwn the beach. There are just two monumental stone pillars with golden minipagoda topping each of them. However, when sitting at a restaurant, your view would be a road. There is none with the vista over the sea. But we think it will come to that later. 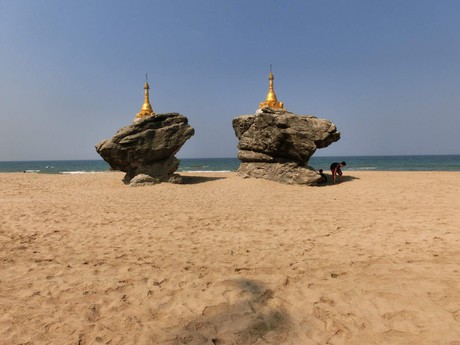 Energetic tourists will surely appreciate unusual one-dy trip on a motorbike along the coastline to Chaungtha beach. The ride takes about 8 hours. In case you are aware of the environment, rent a motorbike by yourselves. First of all, you will ride on sand until you reach Tazin Chaung ferry. You and your motorbikes will load on a wooden raft. Coconut palm alley will be the first sight you will see on the other side. Then you need to cross the rivers of Ye Do Chaung and U Do Chaung. We rode down a narrow path, palm alley, villages, we passed by domestic pigs, and a beach with rocks in the background. We park our motorbike on Chaungtha beac, our fnal destination. It is much more busiest, well-known, and frequented than Ngwe Saung. There you will be not alone in the waves. However, you can order grilled fish or coctails right on the beach. 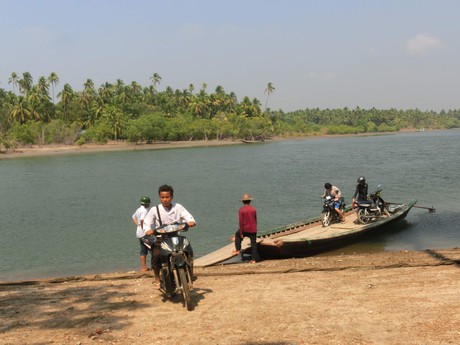 On our way back we taste palm wine. It tastes like nothing else, therefore it is hard to compare it to anything. The wine is made from doub palm. This type of palm grows as high as 35 meters. Its leaves are 1,5 to 3 meters large. Sap which is extracted from cut stems is used to produce wine. Cloudy liquid is then fermented. The wine is consumed only in the morning because it doesn't taste good in the afternoon. The doub palm produces up to 700 litres of this milky sap. Moreover, there are other ways how to use this palm. Baskets, roofs, fences, musical instruments, ships, knive handles, tools are only some of numerous ways which can be this palm used. Also, cigars or cigarettes are packed using this palm.

Myanmar and the waves of the Indian ocean say their farewell. The gates of our travelling future are opening slowly. Burma, I am not saying good bye to you. A greet you: Mingulaba!!