In a local camp kitchen, I was still trying to at least partially dry the wet canvas of the tent, but the time we pushed, so I wrapped a wet tent. For a transfer, w 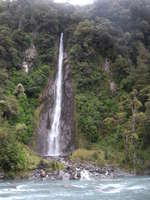 e used our "Travel Pass", which was valid till the end of this journey. We spent on the way about 8 hours, and as always we have made regular stops. One of them was 28 m high waterfall "Thunder Creek" located just a few minutes of walk from the main road near the Haast Pass Pass. Later, we made several stops at Lakes Wanaka and Hawea, we were able to shoot a wild and deserted countryside.

After arrival to Queenstown, where was much warmer and sunnier weather than on the west coast, we went to accommodate to one of the local hostels.  As a freebie, we could take in the kitchen free hot soup, what was great after a day of travel. All wet things, including a tent, we had to dry and went to a nearby supermarket to buy food at the most famous trek around New Zealand - Milford Sound, we had reserved from the following day.

Milford Sound Trek, that usually takes 4 days and whose length is about 53 km, is one of the biggest attractions of NZ. Since it is a great interest, it is necessary to ensure a timely online booking. It is possible to sleep only in designated cabins can accommodate up to 40 people. Not surprisingly, that for half a year in advance may be the place occupied. Price for one night at each hut was about 50 NZD per person if added to one more boat on Lake Te Anau to the start of the trek, and similarly at the end of the trek to the village of Milford Sound, the total amount comes to around 270 NZD. On the other hand, a great advantage is that the trek is not filled with tourists and is limited to 40 people on the one part, thereby "Department of Conservation" (PDF) aims to provide maximum environmental protection. 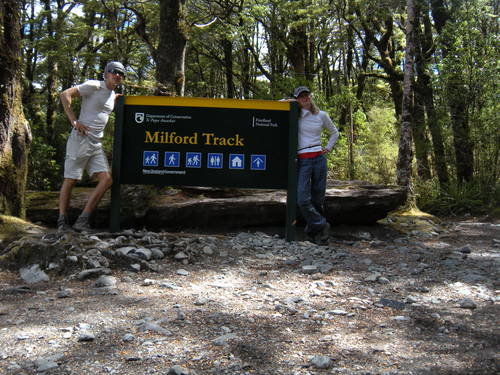 From Queenstown to Lake Te Anau, where we had a boat, we along with a few other travelers took smaller van, which we had previously booked. In the centre of the DOC, we still managed to pick up tickets confirming our beds in the huts and the other about 20 minute rides we arrived at the dock. We had beautiful sunny weather ahead and opened up the fascinating views of the surrounding mountains that rose and reflected from the crystal clear and calm lake surface. For me personally it was a powerful experience to date from around NZ. Cruise took a little over an hour and all the while I stood watch unique natural beauty, which I previously only dreamed of. 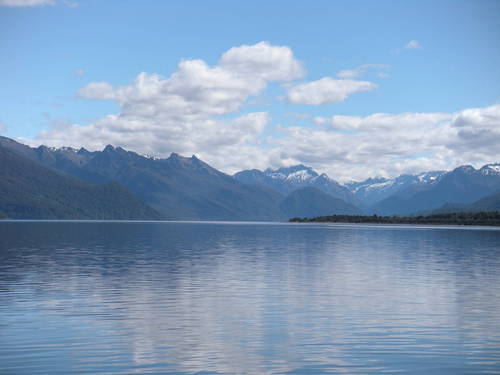 The boa brought us safely to the beginning of the trek - Glade Wharf - where it was only 1.5 hours of walking to the first hut, "Clinton Hut." Therefore, there was no reason to rush anywhere, and after landing we indulged in a relaxing hour break for lunch at the lake. Here we have from the very first moments for yourself to know what all the guides are written. Immediately swooped around us incredibly annoying flies called "Sandflyes", which here is actually extremely high. In the Abel Tasman National Park, we met a Czech girl who advised us and immediately offered a special repellent containing citronella. So now we've tried, but to our disappointment, did not cause more than 20 minutes. It was therefore necessary to cream or be still in motion (while walking flies didn´t do problems). 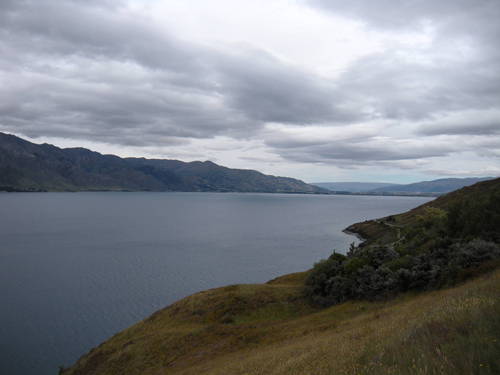 After lunch we went towards the hut. We let all the people go, so we could enjoy a beautiful deserted landscape. The path led mostly forest, but also places the meadow along the river or Clinton. The water here was pure virgin, so I could not resist and went to bathe. Dita had so much courage and stayed only at the shore. After a refreshing swim, we went and arrived at the hut DOC. We chose the bed and it was still early, we went for a walk to the nearby river, where he was again able to swim. This time, however, this place was aptly described as "swimming holes" - here the river was sufficiently deep and formed a kind of natural pool. 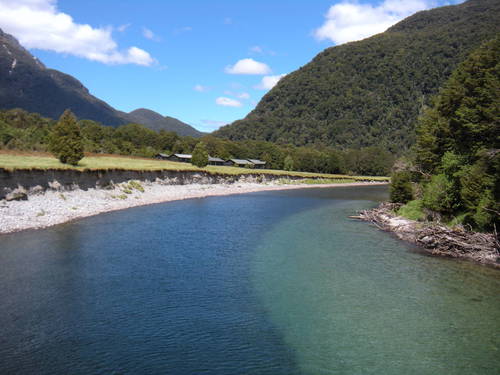 In the evening we then officially welcomed the "ranger" of cottages and did a very instructive and detailed interpretation about the nature of local demonstrations, including all kinds of flowers and vegetation that have occurred in the vicinity of cottages. Later that evening we cooked dinner on a gas stove, which were placed in the common room, and we learn about the "our" mates, with them we had to spend another 2 nights.