First, because most people think of Nelson as a starting point to Abel Tasman National Park and probably also for the reason that there exists a very pleasant climate with average December temperatures are more than 20 °C. 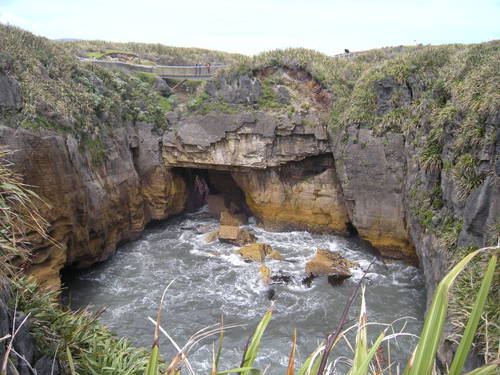 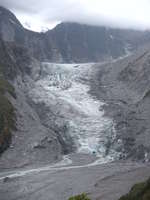 acier. The road ran along the west coast and in places we opened the beautiful views of the rugged coastline. Also here the driver was very friendly and without protest stops us almost every hour. We were pleasantly surprised by stop at Punakaiki with its unique natural attractions in the form of so-called Pancake Rocks (Pancake Rocks). Their formation is associated with the gradual layering of calcium boxes of dead sea animals, and clay sediments on the seabed and then due to earthquake was hoisting above sea level and the creation of coastal cliffs. Layers of rock are the result of a joint action of the sea, wind and rain. The tour also takes a journey with stops at the shooting for about half an hour and just took our long pause. When a strong influx of sea water penetrates into the cavities under rocks and offers an amazing spectacle in the form of spouting geysers.

In the village near Fox Glacier National Park in Westland Tai Poutine, where our bus ended, we stayed in one of the local campgrounds. We built a tent and in the evening went through a little more with the fact that at some nice place to open a bottle of good New Zealand wine. The marked route was quite densely overgrown jungle and because it was getting dark, we decided to go not too far. On the way back it was almost dark and Dita began to fear that we were surprised by a thicket of dangerous animal. Finally, we came back to camp ok and quickly jumped to the sleeping bags.

The alarm clock we had decreed on the 5 am. According to the guide is in good weather you can see the reflection of the highest mountain in NZ Mt. Cook (3755 meters above sea level) of diamonds in Lake Matheson, which is located 6 km from the village. We were lucky in the morning as the sky was swept. Although I did not want to climb out of a warm sleeping bag, at the insistence of Dita, I finally decided to get up. We took a few essentials and travel light went to the lake. We walked along the asphalt road to the restaurant, where the lead marked circular path around the lake. The so-called "Reflection point" we arrived at 8 am and the view was really beautiful. Snowy Mt. Cook and Mt. Tasman are mirrored in the quiet morning level. That was our reward for getting up early unpleasant. After completing the circuit we had a little break in the restaurant. We sat on the terrace and sipping hot chocolate decorated we enjoyed views of two majestic mountains. 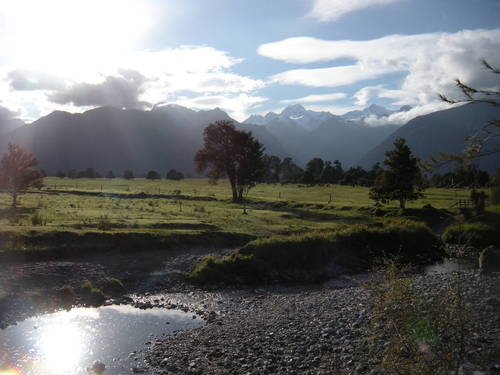 In the afternoon we planned to walk the route to Fox Glacier, which is generated by combining of four Alpine glaciers. It flows from the highest peaks of the Southern Alps from altitude 2600 m above sea level almost to the coast and with a length of 13 km is the longest glacier in New Zealand. Although the glacier was last 100 years in decline, currently progressing again (in 2006 the average increase was assessed at 1 meter per week). Because the glacier is located on the opposite side, we had to go back to the village from which resulted several marked trails. First we went to the right side of the river flowing from the glacier and climbed to the place where he was a beautiful view of the entire glacier. Then we had to descend back to the river, cross the bridge and continue along the left bank to the glacier itself, respectively to a point about 100 meters from the glacier. The entry to the glacier is prohibited without a guide. During the last few tens of meters in front of the glacier dropped the air temperature about 10 ° C and also somewhat lifted wind. However, the feeling was indescribable, and one at the moment you realize how small compared to the power of nature and futile. 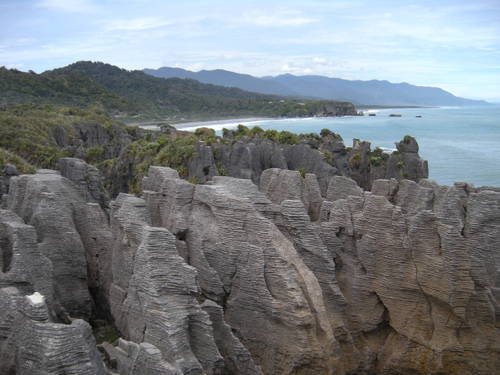 Because we were tired after all day of walking, we decided to ask on a nearby parking, if someone take us back to the village. We were lucky just with first car. Young Dutch couple drove it and willingly took us back to his borrowed caravan to the village. They just looked for some accommodation, so we advised them of course "our" camp, which has a lot of nice places for camping caravan. In the evening we cooked dinner at the local kitchen and lay down with a good sense of an enjoyable day.