Because we almost finished with New Zealand dollars, we used the possibility of exchanging money in one of the local banks, which is on the main street Trafalgar Wed enough.

Travelling on local buses is really very pleasant and rewarding experience. Unlike the Czech Republic, here are drivers incredibly nice, and often came to me that the role of the driver shifts into the role of tour guide. For every interest that we passed, our driver gave us relevant information, sometimes even joked. On the route from Nelson to Abel Tasman National Park even happened that one of our passengers forgot sunglasses in one of the local rental of sea kayaks. The drive had no problem to stop and wait about 5 minutes, until the glasses found. Just so I wondered what the typical Czech driver would do in this situation. 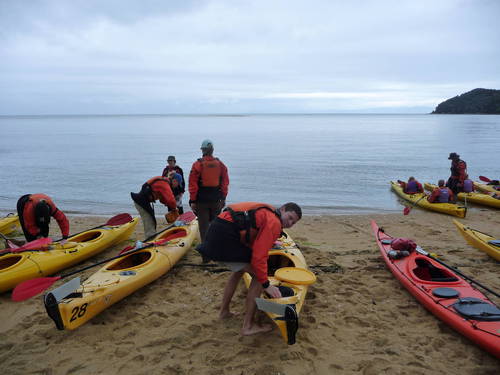 Even before the trek we had planned to try sea kayaking on our own. So in the evening we went to one of the local rental and booked a rental boat for the next day. Free trip for two on one day was just over 60 NZD. Then we went into camp near the beginning of the trek, where we spend the first night. Spread our tent and camp because it was about 100 meters from the sea, we could not resist the temptation and went to bathe. But the sea was very cold, so "great" it definitely was not swimming. On the other hand, the water was crystal clear and the coast lined with curious eroded forms including the beautiful rock gate. 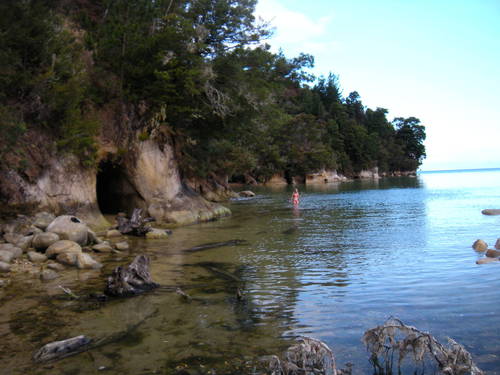 We woke to a rainy morning. We waited for a while to see if the weather get better, but unfortunately it did not happen. Willy-nilly we had to go towards the rental, where we had already paid free kayaking. Fortunately, we did not have to pack a tent, so all the things we had set off inside the car and just easy. The rain subsided, although at times, but never longer than a few tens of minutes.

We arrived just when instructor began to explain the principles and techniques of free kayaking. Also gave us tips on where you can see seals, penguins, birds and other fauna. After about an hour briefing we went to the beach where we could go along the coast according to convenience. The boat came with two people with personal belongings, which were well-sealed in waterproof bag. 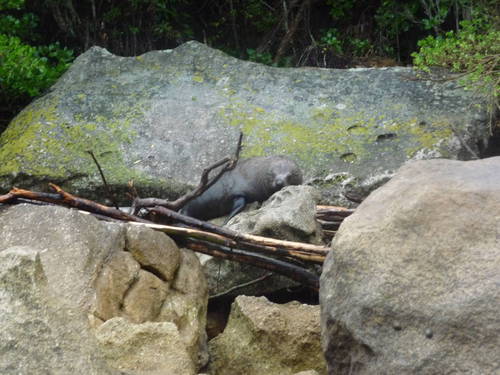 According to the recommendations so we paddled towards the nearby islands, where it was possible to see some animals. To our misfortune, however, we caught quite a strong storm, so we held off the coast in case if a strong wind picked up. The storm fortunately did not last long, because we dared to go closer to the islands. Indeed. In addition, we saw lots of seals of various birds, but we have not seen penguins. Although we have upper body drenched through and through and shook with cold, this unique spectacle was worth it. 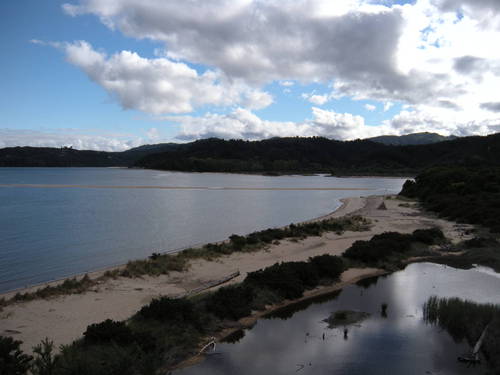 After the circumnavigation of both islands, we decided to stop while still on one of the beaches along the coast and hide in a rock niche. The rain continued unabated, so we agreed that our trip we will have to be shortened. Soaked and frozen, we arrived at the beginning, where we set sail in the morning. The ship is already taken care staff was very helpful. He even gave us a small change to a hot shower and then we were invited to the hot tea. This will of course come in handy and we left for a long time to persuade. In the evening we then went back to our camp, made dinner and early went to the hot sleeping bags hoping that tomorrow will bring better weather than it is today.