It is this period from which the main landmark of Cordoba comes from – Mezquita (later rebuilt to a cathedral). Roman Puente Viejo bridge runs there crossing the Guadalquivir river. Torre de la Calahorra is at the bridge as its dominant feature. It used to be part of bridge's defenses but today there is a museum. Make at last one photo of this place for there is the most beautiful view over the entire compound at this place. 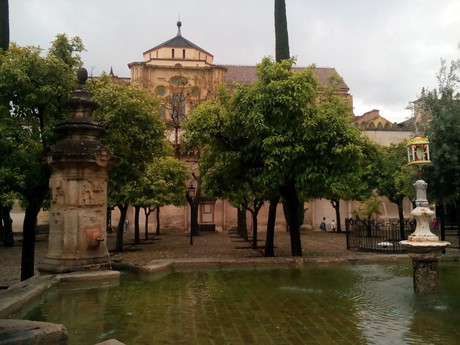 hould you not have accommodation in Cordoba then I recommend you to get up early. The cathedral is for free until 10 am. There you can see its typical double arches and beautiful garden. In the latter, there is a fountain and orange trees. The ticket price can be as high as 18 euros. There is a visitors' center in ront of the cathedral. They give you useful advice on the best routes across historical center or you can take a map there. (Moreover, there is a free WC in the cathedral.)

A network of narrow streets is situated behind the cathedral. There are usually souvenir shops selling souvenirs inspired both by Arabic and Spanish cultures. Many places offer you some tastings - for instance fried almonds, almonds in honey, and other small, typical dainties. There is also large selection of spices and tea which is weighted when you buy it. Yet while shopping don't forget to look around yourselves and enjoy Cordoba's typical houses and their romantic yeards covered by flowerpots, and flowers – Patios cordobieses.

So what else is there in Cordoba? Alcazar chateau is another place worth seeing. It was built in the 14th century. The chateau is encircled by beautiful gardens with fountains. Concerts or festivals, for instance flamenco festivals, take place there in the present. 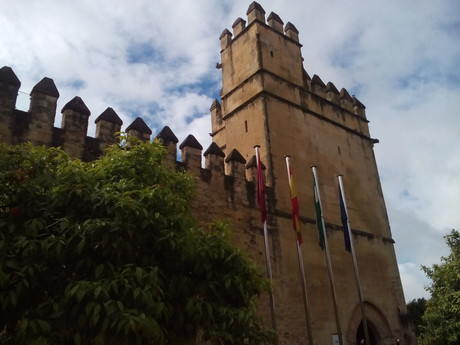 Also, make a stop at one of the local bistros. You can get a typical cocoa drink (very sweet but delicious) for ounly couple of euros. It comes with a warm bague

tte with dried ham, olive oil and tomatoes. While eating it is very possible that you will witness a lively discussion Spanis-style. One even ponders if he didn't become a part of some argument.

Many bus lines ride to Cordoba. In case you can speak Spanish, I recommend you to use blablacar.es. It is up to two times cheaper than any other means of transport. Moreover, you can talk to locals and arrange a pick-up place that would suit you better. By coincidence we met two Slovaks when we were on our ride to Cordoba. We didn't talk much Spanish yet we had a very pleasant chat with them outside our home country.