Journey to the Castle

Although to the castle leads paved asphalt road, the car you have to park below the castle hill on unpaid and unguarded parking lot. Top of the Castle is a nice walk that will take more than an hour. Straight from the big city here Saris resulting yellow sign. The access road to the castle is also a nature trail. Although the Castle Hill is a National Nature Reserve, you are welcome here to go to the bike. There is no ban on cyclists. Just keep in mind, that except you, there are moving hikers and forest animals as well.

At present, the owner of the castle is the east Slovak town Velký Šariš, that with the assistance of money from euro funds trying to ruin with walls preserve. The rescue of the castle, however, plays an important role as a large group of volunteers who are really doing a great job. All stakeholders work together to make from the Šariš castle does the tourist destination. As the ruins of the castle in the middle Šariš basin in a beautiful high volcanic cone-shaped hill, visible for miles around, it would be a shame if because of dense forest vegetation was not well seen from a distance as well as the castle at its peak. That is why, according to project leader for the reconstruction of the castle hill deforested. 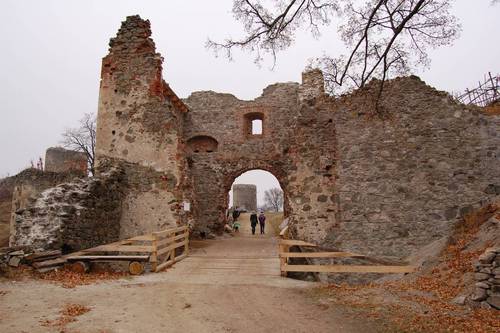 Bastions and ramparts are gradually conserved. On the main bastion has grown the view point.

It offers visitors a beautiful panoramic view of the surroundings. In good weather you can see as far as the High Tatra, Levoča hills, or Čergov or Slanské hills. Well visible are the ruins of another medieval castles - and Kapušianský and Kamenický. As at your fingertips you will have the Šariš region. Gradually, in the renovated complex would accrue even had a falling bridge on the inside of the castle, or room for a permanent service and guides. Another

interesting feature of the castle are freely moving domestic goats. They graze all day here and helping to remove unwanted vegetation, which is also converted into delicious milk, curd and cheese. It hangs at the entrance, however, information boards with text: "Watch out, goats are rude. Do not leave food unattended. If you will bother goats, beat back them by wand, not the hands. Hand goats understand as a challenge to play." Because I was greedy goats here built fenced shelter in which especially families with young children can easily eat without chasing the goats.

Social and cultural events at the castle

Annually, since 2006, the castle end of the summer held Šariš castle games. They

have an extraordinary popularity. He drew the first year instead of the expected 300 attendees, up to 2000 people. Since then, attendance increases every year only, so the castle became a festival favourite summer cultural event that is attended by not only people from the surrounding area, but from all over Slovakia. Castle games are not the only cultural event that takes place here. The castle today is really literally comes alive. In early February, the second took place year under the name of the castle Ball for ball brave men and ladies who like castles.

Local people it is certainly waste to invite. Šariš castle belongs to them just as well as through volunteer work again beginning to be justly proud of him. Well the rest of you, even if you live far away, do not hesitate to sit on the train, and saddled his beloved four-wheel or my family and friends to visit this picturesque corner of Slovakia.