Small village which is far from busy giant resorts became a place of my summer vacation. This not that big fishing village on the southeastern corner of the island because can satisfied the most of requirements for a sufficiently leisurely spent a week relaxing, away from all the theme parks and clubs.

Limni Keri is located in the National Park of Zakynthos. It surrounds by mountainous landscape, steep cliffs falls into the sea and azure blue sea. Also the surrounding roads which leads cross centuries-old olive groves, with twisted trunks up to a thousand years old.

The village has got named by the lake, which was previously located in this area, but later dried up. Today this wetland is a nesting of many species birds, but also mosquito paradise, what a visitor will get the experience certainly during the long summer evenings. Repellents and other annoying insects liquidators then offers several small supermarkets, where you can find virtually everything there is to be a pleasant stay here, even assuming that you choose for your own meals, respectively cooking in one of the suites and villas studies. With some exceptions the food is in the same price as in Czech Republic. Keri can´t boast by a wide ports promenade, where they ride bikes and crowds of tourists occupying the souvenir shops that although there are also, but reasonably, and not intrusive. Several cozy taverns inviting you by all kinds of goodies, adds a Greek fast food restaurant with great gyros.

Fresh bread and offer high-quality meat -  all of these obtains the local baker and butcher every day. 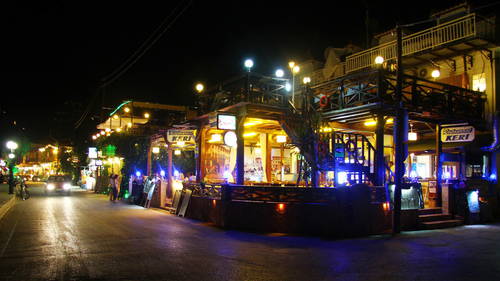 Local wine and it doesn´t need to be always Retsina, is really strong. Beer brands and domestic Mythos in Greece are all commonplace. As a specialty is especially for visitors is recommended Zante rabbit with a red tomato sauce...

The port and also the town on the adjacent slope even in the recent past was often the target of raids by pirates and conquerors. Jolly said that the blood circulates in the veins of almost every native, but it is up to the typical Greek hospitality and directness has no effect. Although local residents, mostly fishermen, farmers and shepherds, they had to adapt to modern requirements, in part, tourism, not by Lim

ni Keri, or they themselves suffered.

Several winding streets between one-storied houses, which occasionally runs vampire cat, and buildings that withstand even a devastating earthquake in 1953, still breathe by the atmosphere of traditional and offer visitors the opportunity to see low and non - consumer way of life of local denizens.

A little more complicated is in Keri with the availability of free space on the beach. Despite a small capacity of local accommodation providers, the local pebble beach truly one of the smaller ones, respectively narrower, and so it is good after all just a little to swim up earlier.

Who does not mind a little less personal space, has no problem with any of the attached trees or umbrellas. In the vicinity there are a lot of other places to be after about 20 minutes walk to go and make a bed for the stones completely in private. The sea or marine life is not interesting here. The rocky bottom or slow input from the main beach for diver won´t fascinated. On the contrary, children are swimming is not a problem precisely because of the relatively shallow bottom. Pebble beach at Limni Keri with beautiful views of the island Marathonisi to which it is possible to sail on a motor boat, it is especially suitable for families with children.

We chose for our holiday accommodation in the studies - namely in studies of Miranda, which although did not offer comfort gardens such as Villa Dakis, but definitely on local services, we can´t complain. The spacious terrace where you spend most of time anyway, modest, but fully equipped kitchen and kind owners.

There also works trouble-free rental cars, with prices of 30-50 euros per day with insurance (new VW Polo for 38 euros per day), bike and motorcycle rental and boat harbor, but they are a bit more expensive (20 Euros / hour for the boat 7 persons). Above Limni Keri is itself an ancient v

illage of Keri, from which you can supposedly watch the most beautiful sunsets in the Mediterranean. At that, too is the biggest Greek flag in the world...

Unless you will choose to ride throw the whole island, it will take about a day, unless your stop won´t be long, but even so you will be able to swim and freshen up at many good places. Tour the island has about 130-150 km, the main tourist attractions are described in our previous articles on Zakynthos.

I hope my travel notes help you to decide for your next vacation. Zante is not probably island for everyone, do not expect treasures of antiquity and amusement parks, more honest Greek peace and quiet holiday…