Past 9 o’clock, we leave for the island of Eysturoy. There a hike waits upon us. It is up the mount of Slættaratindur – a “flat peak” in the translation. 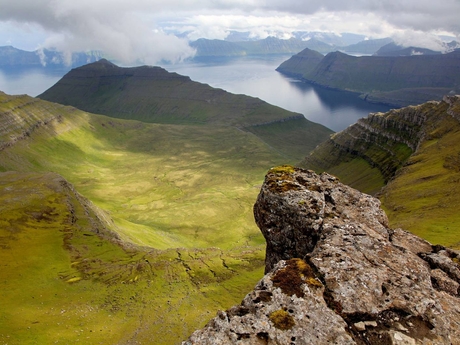 Clouds appear and it starts raining. Our hike is in peril. The weather changes swiftly, we cannot underestimate it. Fortunately, there is just a bit of fog. We take on more clothes and go for it. Quickly our group splits to many smaller, in front our guide hurries with other fitter hikers. They take the shortest route. The others, including me, don’t know about the shortcut to the top. We ascend slowly. 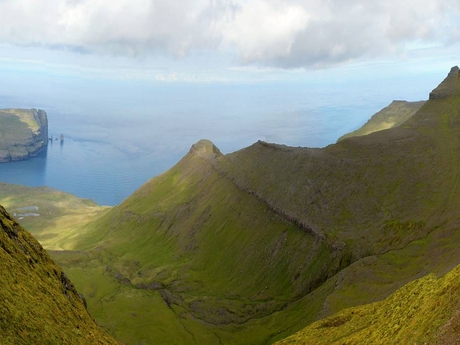 Except for two oldest members of our group everyone attempts the climb. At the beginning, I say to myself: "I can make it, ," however my stamina is slowly depleted and the things I carry (a bag with camera and equipment – approx. 7 kg) feels heavier. I slow down. When Stefan (74 years old) passes by me with an umbrella above his head, I am loosing faith to actually get to the top. I have no previous experience with such climbs. I am not fit enough to do it, so I am thinking about giving up.

Jarda notices me he is our great cook and “mountain leader”. He patiently explains how to hike, when to stop to refill liquids or energy, where to stand and where not to stand. Where to look and what to grap when one stumbles. He helps me with my camera bag, to my great relief. Without his help and advice, I wouldn’t manage to get to the top. 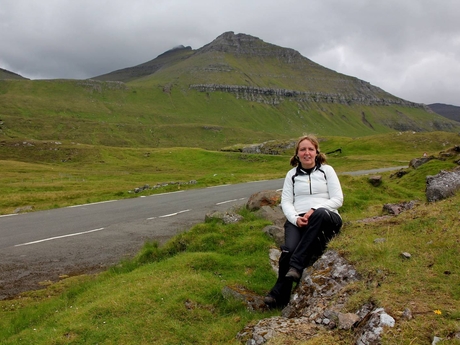 Others are waiting on the top, they encourage me to finish last couple of meters. They had an hour long break there while I was trying to overcome every meter of mountain terrain.Now they slowly get away. I would like to enjoy it here but no time to waste. I feel great to overcome myself and also for great views to the landscape around. I make couple of pictures and descend. As you have probably already realized, to get down is not easy at all. Sometimes it is even more difficult. My guide did not leave me, however and we would reach the bus together. Feelings are great and I greatly appreciate the help. One has to celebrate the fact that we reached the top station. The beer does the job..

We go further to the village of Eiði. There are many turf-rooted houses. Grassy roofs originate in northern Europe. It is very common on Iceland, and it really proved itself. Some advantage is : roofs do not get overheated, absorb emissions, work as heat and sound islolation. If they are made good, they can last forever. Moreover, they are really nice to look at. 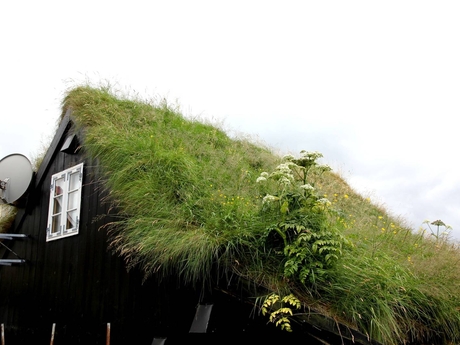 Tour in this village is the end to our daily program. We return back to our camp to attend an introduction evening with music. We reserved a “social room”. The environment is cozy, warm, and Michal and Jitka made a delicious fish delicacy.

In the next part, we visit the strongest fortification in northern Europe - Havnar Skansi.