I arrived in Utrecht in the early evening on a rainy day a few minutes after I got off the train, the sun came out and it stayed in the sky until nightfall. Everywhere was so wonderfully clean air and pleasant temperatures. Since I was in town the day after the Dutch national holiday, in which all very cheerfully celebrate the king was everywhere still plenty of orange flags, orange wigs residues and sometimes somewhere broken bottles or cans. However, when it compared with the state in which the day before at eight in the evening Amsterdam I almost did not believe that anyone has the most atrocious shutter clean. 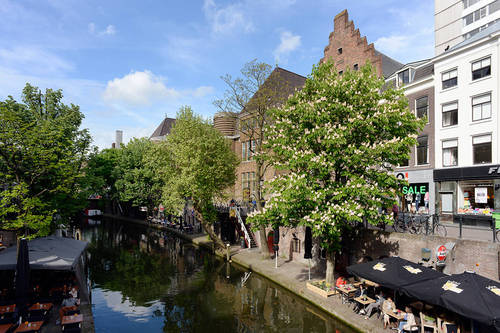 As in other Dutch cities here or the construction of modern architecture that is very sensitively placed in the overall context of the city and at all does not disturb the impression of the beautiful, historic center. The houses and streets you can feel the grandeur of a long history, while the architecture clearly shows that Utrecht < strong="">>has always been a very rich city. Most tourism is concentrated in the center along one of the main channels - can be found here nice cafes and restaurants and many shops. Many businesses have furnished sitting right on the canal and guests can sit under the blooming chestnuts and fully enjoy a relaxing evening mood. 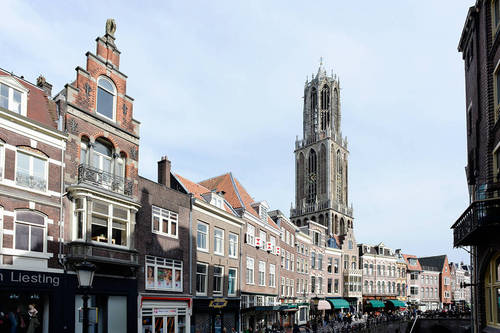 In Utrecht there is the highest church tower in Netherlands. It is a 112 meters high Domtoren, that used to be part of Martin of Tours cathedral. The nave of the cathedral was destroyed by a wind storm in the 17th century. The tower is said to have a nice view of the city, but I did not want to climb endless stairs to the top, so unfortunately you will not give extra perspective. But if you go to Utrecht yourself, you will not regret it, I believe you are not as lazy as I am. 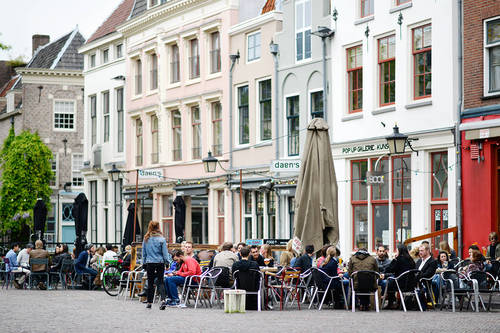 And what was the most interesting thing in the city for me? Well, after all we can find beautiful architecture elsewhere ... I was amazed by people there. No one was in a hurry, everyone there obviously are aware of the transience of human life and have no problem with your short time here on earth really enjoy. They smile, students, smile, white collars, the terrifying streets, smile and retirees (and who knows, maybe it's been more students). Vendors treat customers as friends and vice versa. And I did here my first payment with a debit card in a caffeé shop. You would not believe it but it was quite a problem the Netherlands total major problem. Well, isn’t it a paradise?