So, we passed next section of 32 kilometres in a train, and another distance, to the community of Ollantaytamba, by bus. Moreover, we had there good luck, as some driver offered us (Pepa translated us all details of such offer) that big car, placed round the corner, would be fully reserved for us, at a price of Sols 20 per a person. He was ready to take us to Cuzco, make a stop at whatever place with sightseeings and monuments wished, give us an explanation and commentary to all places of interest, we passed. We decided immediately to accept such interesting offer. 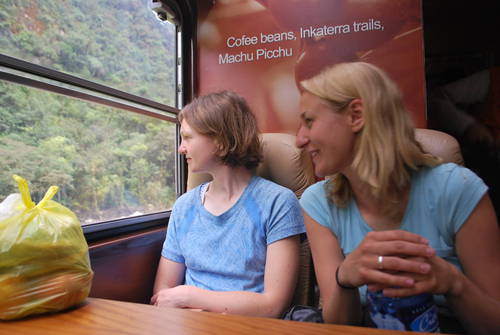 So, the first place, where our new guide brought us, was the centre of Ollantayamba with Inca citadel. We informed him that we would return within two hours ane left him. We bought multi-entry tickets (it was valid for many Inca-monuments in Cuzco environs). The unit price was Sols 70 for students (with valid ISIC card) and double for the other persons. Some of us needed to change the dollars for local currency. An Indian lady presented her service that possible exchange-money could effect herself. When she announced the exchnge-rate, we refused as it was quite expensive, and went to look for exchange office on the square. And finally, we found it in local shop. The dollar exchange rate there was much more favourable.

We went through stony monuments from Inca time period. We liked it very much, the stay was very nice. We chose a shorter circuit, which passed through former Inca thermal spa. However, we did not managed  to climb to granaries, placed at the opposite hill, but it was not too big disadvantage, as we could have proportionally good outlook. We were captivated with rather sagaciously canal systems, used for irrigation, including hard working group of archaeologists. So, there was always something to be discovered. 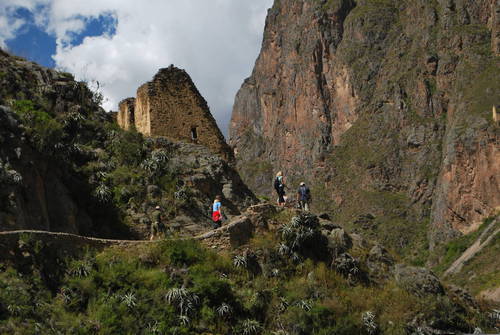 After Ollantayamba sightseeing, we continued our journey to the village of Urubamba. The guide proved to be as excellent, and informed us about all possible interesting facts of Peru. He even made a stop in one village, and led us into manufactory of local, lightly alcoholic, corn beer, known as chicha. Anyway, I could not say that just this drink would be a delicacy. On the other hand, some film describing Peru (which I saw before my departure) informed that such drink would be typical for this countryside. So, in general, I was glad that I had the chance to taste it.

From Urubamba villahge, our motor vehicle started to climb upstairs, to the community of Chinchero (3700 metres above sea level), also mentioned in our multi-ticket, as an important place of interest. We could enjoy again marvellous outlooks towards table-land, which was intensively used by agricultural farmers. 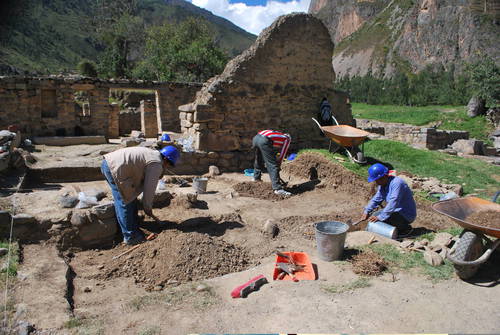 In Chinchero, our guide led us, at first, to textile shop. We were appealed to have a seat in back room, and when we did it, the performance began. The Indian women showed us, step by step, a  procedure, how the stuff (cloth) were being manufactured: from the production of wool, via its dyeing with various natural pigments, up to weaving of solitary stuffs (materials). We got also coca-tea.

When the performance was over, we were invited to the shop, and there was an expectation that we would buy something. To tell the truth, the products were very nice, but, small coverings, the manufacture was brought before us, were terribly expensive. We understood fully that, in order such rather nice small rag could be manufactured, this would require a lot of handy work but we were unable to give up so much money in this respect. So, I decided to buy a shawl and cap only, as a gift for my family. The other friends were in the same situation and bought some small things only. 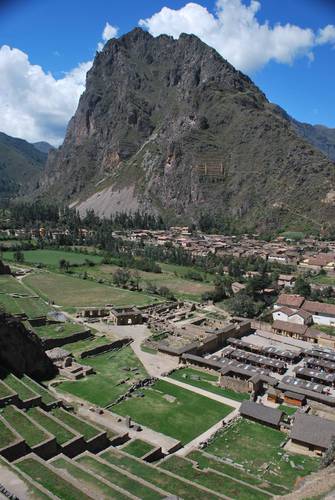 After shoppings, our driver led us to another monuments, and he left us. Inside this complex of Inca monument, we admired a church and another constructions, referring to past colonial history. However, back to our car, we were forced to elbow throughout crowds of Indian women, trying to impose us upon their goods. So, finally, I bought one great and heavy bed covering, which was not too expensive.

As soon as we returned to the car, only a transfer to Cuzco was in front of us. The driver was very communicative, told us many interestíng facts of Peru and informed us also about relations in his family. 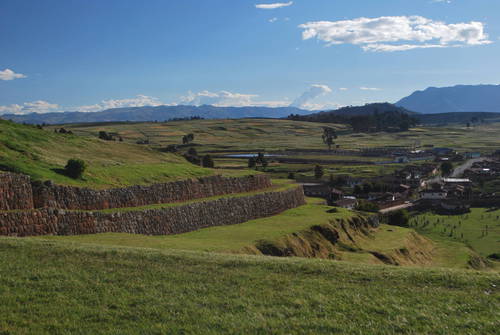 In Cusco, we came to the hostel, where our belongings were placed. We had the intention to be accommodated again in case that there would be free places. However, the hostel was full, and hotel manager sent us to another one. This supplementary accomodation unit was not fully in the operation, and did not look like in ideal way but we were forced to become reconciled this fact. Moreover, we did not wished, in the night, to look for some better place.