en.infoglobe.cz » SK, Skalica – A Town on the Border with the Czech Republic

We visited Skalice on one summer weekend. The sun was extremely shining and, fortunately, pleasant wind was blowing. Thus the walk in the center was very nice. During our wandering we met many beautiful corners. We had a splendid ice-crime on main square; there were lots of different flavors of normal or draught ice-cream. We ordered local specialty Skalicky trdelnik to eat while drinking a coffee. It is quite difficult to make one; there are several ways how to prepare it at home, however, none would replace original way. Although you wouldn’t buy a fresh Skalicky trdelnik on Sunday for they are made only from Monday till Saturday, a day old trdelnik would be still amazing. In the evening, we stopped buy in a cake shop on main square to buy a trdelnik. But they were sold out so we were bit disappointed. Nevertheless, the Skalicky trdelnik wasn‘t the only thing we liked about this town. 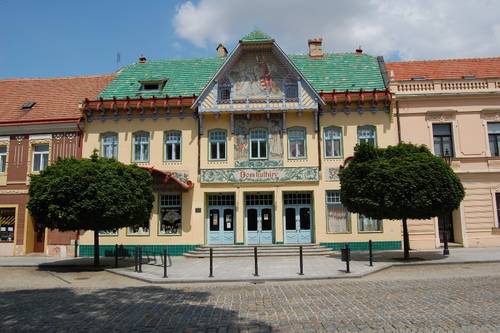 Beautiful well-maintained square
Most landmarks are located in the historic center of the town or nearby. The triangular itself was very interesting for there is, for instance, the so-called Slovak House, an Art Nouveau building , one of the most interesting buildings in Skalice and an adornment of the whole square. Dusan Jurkovic, a notable Slovak architect, was behind its blueprints and till the present culture in the town concentrates in this edifice built in 1905. There are exhibitions of the Zahorske Museum and the Julius Koreszky Gallery. Also, very interesting is St Michael Archangel’s Parish Church dating to the year 1372. The church burned down several times and later a massive tower was placed there and a visit of which I sincerely recommend you. There is no entrance fee; you only have to wait for a guide to come. We were lucky as we had waited only five minutes in front of the tower and then we enjoyed a magnificent view and learned much from the narration of young guide. Even if we had been waiting longer, her telling would have been worth of it. On square, right next to the church there is the St Anne Ossuary . Originally a Gothic building with squared apse was built towards the end of the 14th century, later in the 17th and 18th centuries it underwent Baroque adjustments. 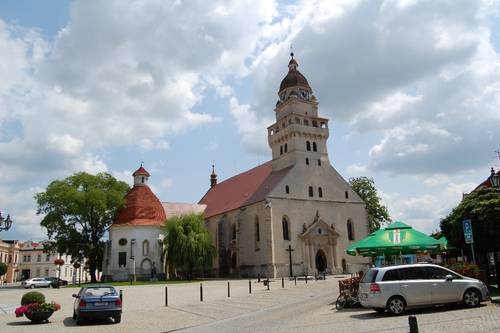 Other landmarks in the town
There is a number of other landmarks such as a Fransican church of the Virgin Mary that today provides space for various cultural and social conventions; among them are the Skalice Days , the Trdlofest or the Music fest. Among other sacral buildings (there are lot of those in Skalice) are also the Jesuit church and monastery . Keep in mind that Jesuits were not purely oriented on spirituality but they were also educators, therefore they founded a “middle-school” in 1662 in Skalice. Later this school was promoted to a collegium and today it is Skalicke gymnazium. This school is one of the oldest middle-schools in Slovakia. On a hill in the northern part of the town there is a classicist calvary ; around its stone cross with statues of St Mary and John there is a chapel with paintings of Way of the Cross. We could admire and describe the landmarks of Skalice for a really long time, but in the afternoon we moved few kilometers further. 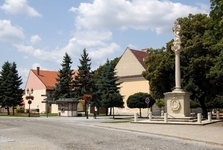 The Skalica harbor
Only four kilometers from the town center there is the Skalica Harbor. This harbor is a starting point for boat trips along water trail known as the Bata Channel , which offers great possibilities for water tourism as well as bike tourism and active recreation. You may rent a boat in the harbor, or fishing equipment, climb up to an observation tower from the top of which you an admire beautiful surroundings, or you may just relax at water. What i salso interesting is a boat cruise to the harbor at Sudomerice (the technical sight of Vyklopnik) or Straznice (open-air museum). There are 13 lock chambers along the all lenght of the channel, from Skalice to Otrokovice in the Czech Republic.. On your way you would meet many landmarks and interesting places such as the Plz wine cellars in Prerov, or historic water cable way in Vnorovy. This time we were not lucky, though, for the summer season was at its peak the boats were outrented. Anyway, you can experience a pleasant walk along the channel for local nature is really amazing. Locals also suggested to stop by in some of local wine cellars and taste a pride of local wine growers - red wine Skalicky rubin . Not only this one particular but also other wines we tasted that evening were amazing. I really recommend you to visit Skalice with its tremendous wines, despite we didn’t manage to take a boat cruise. 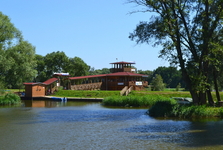 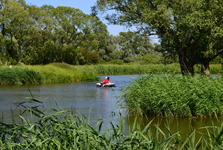