en.infoglobe.cz » Slovenia: By Cableway on Vogel

We woke up early morning. The landlady was already waiting for us with a pleasant smile on her face and she had prepared a delicious breakfast and made a strong black tea to a Thermos flask for us. We hadn’t even unpacked our things so we just threw our stuff into the car, thanked her for a nice and, unfortunately, short stay, and we moved by our car to the bottom station of a cableway to Vogel. The station was only few minutes away by a car ride from Ukanc settlement.

The Vogel ski resort changes to a sheep paradise in summers

Relatively large ski center is located in the Julian Alps right above Lake Bohinj. It attracts myriads of skiers every year and people fond of tourism and nice views as well. Even off ski season a cabin cableway goes on Vogel and takes tourists high above Lake Bohinj up to 1535 meters above the sea level. Already during the ride in a cabin we saw beautiful land and lake beneath. After we got off the cabin we found ourselves in an entirely different world. The temperature was at least 5 degrees lower then at our starting point, cold wind was blowing and even fog appeared. But this didn’t spoil our pleasant feeling of this amazing place. Except few tourists who took the first ride to the top with us, there was no living soul. All around was peacefully quiet. We took waterproof jackets from our backpacks and for a while we just stood there and enjoyed the beauty of the place. Our fellow-travelers spread around since the top station is a point from where you can take many trips. That day we chose only a short walk to Točna vintage point, only an hour walk from the cableway. Only ten minutes after we set out we encountered a herd of sheep that was grazing upon grass. Sheep were walking on slopes and it was apparent they were at home there. There was no herdsman or dog that would guard them so we went among them for a while. For me, a town-girl, who doesn’t see sheep to often, it was very interesting to just watch them for a while. We get off the road and let the sheep to be our guides. Eventually, there appeared to be herdsman’s hut not far from ski slopes. 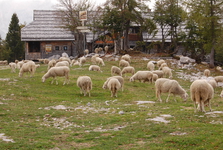 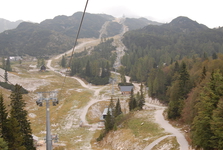 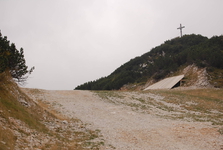 Točna vintage point offers an amazing view over the landscape from 1665 meters above the sea level. Except a massive memorial cross with a small bell there is also a bench. We had rested there for a while, had some tea and slowly moved off downhill. 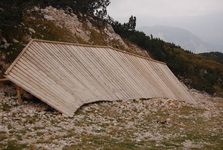 Apart from skiers and tourists the place is beloved also by bicyclists who have there an interesting bikepark. Also fans of paragliding will enjoy the place, since starting places are marked on an infoboard. 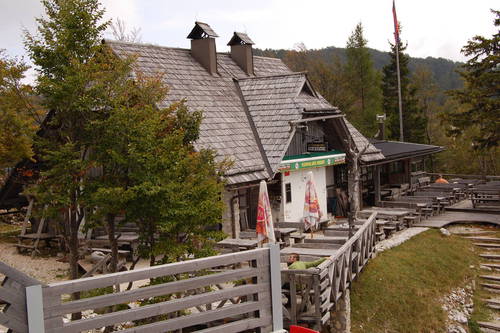 On our way back we stopped in an alpine cottage where we had a good lunch. Then the cableway took us back down. For the last time we enjoyed a view over beautiful Lake Bohinj and we bid Slovenia farewell.

We got into our car and we moved off to Austria. There we spent the last night of our vacation

Where we stopped and what we had experienced you will learn soon.