As you may read in some of the last articles on Barcelona, among the most valuable sights in modern history of Barcelona are buildings projected by Antonio Gaudí. However, if you focus only on them, you may miss many other interesting places worth seeing

One of them is L'Aquarium Barcelona. It is basically located on a wharf and you can reach it easily for example after few minutes of walk from Barceloneta metro station. The aquarium is considered to be  the world’s largest institution studying organisms in the Mediterranean Sea. While walking in the aquarium you can see up to 450 sea species (together the aquarium holds more than 11 000 sea animals. The specialty of the aquarium is an 80 meters long tunnel. Through the tunnel leads a moving carpet that will take you slowly through the attraction and will help you to avoid long queues of inquiring visitors. Seeing sharks, rays and all kinds of fish swimming next to you or above you is a unique spectacle. 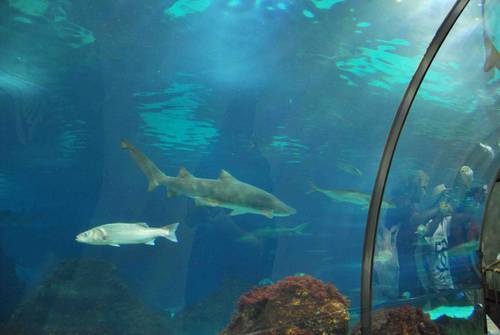 When entering the aquarium you will certainly notice an amazing seafront of Barcelona. It is hard to resist a small walk there. Activities there are somewhat magnetic – you will hear dozens languages from all around the world; you will see artists not only from Spain but also from Latin America in their attempt to catch your attention (and perhaps some Euro) by their music, paintings or performances as living statues. When you will ramble there you will have on your right side the Catalan metropolis bursting with life and on your left you will have peaceful Mediterranean Sea. Nevertheless, this is not everything that will impress you

during your walk on the seafront of Barcelona. For example, you can see replicas of 15th and 18th century ships. They are imposing and if you pay the entrance fee, you can walk on their decks.

Very important sight you may not miss is the monument of Colon (aka Christopher Colombus), the Italian sailor who in service to Spain unexpectedly discovered the New World . Mighty lions guard a monumental column that has circular base with 20 meters in diameter. The monument was built in 1888 on the occasion of a world’s fair. More than 7 meters tall statue of Christopher Colombus stands on the peak of a 40 meters high column.

From the monument you can continue on one of the most famous European boulevards – La Rambla. 1,2 kilometers long La Rambla is the artery of Barcelona that connects the Columbus Monument with the Plaça de Catalunya. It is the liveliest, the most colorful and the most famous street of this city. You will pass by original living statues or endless stands where you can buy almost anything from newspapers to domestic animals (mostly birds). Right along La Rambla are located some important sights such as an opera house first opened in the middle of the 19th century - Gran Teatre del Liceu; Centre d'Art Santa Mònica – which is a museum of contemporary art; or Palau de la Virreina – a baroque palace, which is today a museum. Tourists will, most likely, appreciate Mercat de la Boqueria – a huge roofed marketplace tradition of which begins somewhere in the 12th century. At the market vendors are selling not only sweets, but also dozens types of fruits and vegetables, meats and other products. Most certainly you won’t regret spending few minutes there and feast your eyes and give your stomach a hard time.

In the next part: Montjuïc 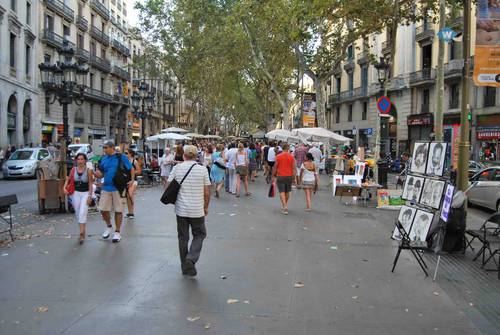