After a quick introduction with the city in the previous episode, today we start to ta

lk about points that should be on first places of tourist´s interest.

As usual, as the emergence of Barcelona is shrouded in mist of legends and myths. Better known story of the foundation is linked with the powerful demigod of Hercules. The second legend, which seems to be a bit more realistic, says that the city was founded by Hamilcar Barca (father of the famous Carthaginian Hannibal the Conqueror), which approximately in the 3rd century BC gave the city name Barcino.

The city was during its history become the Roman military camp, in the 3rd century AD was conquered by the Visigoths and for some time was the capital in the area of present-day Spain. Then the city came into the hands of the Arabs, who despite that they lost it in the war with Louis, so

n of Charlemagne. In the 17th century the city suffered from the Black Death, the plague that wiped out half of its population. After the jump a few centuries ahead to 20th century we find that Barcelona was a republican stronghold during the Spanish Civil War and after the fall followed by a mass escape people who headed to the border with France. Francesco Franco, that the 30 years usurped rule over Spain Barcelona, Catalonia hence, punished with cancel its autonomous institutions. Later, with the fall of Franco's dictatorship, Catalonia regained its political and cultural autonomy status. In front the world Barcelona started to shine again, and in 1992 there Olympic Games were organized.

One of the many references to the brilliant architect of Antoni Gaudí i Cornet. Gaudí in his buildings linked elements from his deep passions - architecture, nature and religion. The Casa Batllo, which is now a World Heritage Site, Gaudí worked with architecture, furniture designer and painter Jujol. The house, that local people call House of bones, has a very distinctive appearance, as is also typical of Gaudí, and can´t happen to you that you would get confused with something else, and it is difficult to put into some of the specific architectural styles. The building built between 1904 and 1906 is close to Passeig de Gràcia and currently operated as

the museum opened to public. Unfortunately, it is common, when outside the museum stands a long queue of human snake. It could discourage the relatively high price of admission. However, photographs of the interior you can convince to stand still for a moment.

Another stunning of Gaudi´s buildings, that importance was

emphasized by writing to the UNESCO World Heritage Site, it began to emerge in the course of Gaudi work on Casa Batllo. Casa Milà was completed in 1912. Bold and innovative style in which the house standing near Casa Batllo was built in that time, when uniform and austere façade were common, was outrageous. Its first owners were married couple Roser Segimon and Pere Mila. Mila, who was wealthy returnees from South America, was blamed of obsession with money. The more outstanding contrast between his personality and Gaudí's intention, that should lie in the Spiritualist symbolism of the building.

Next time we head to the Sagrada Familia and Park Güell for example... 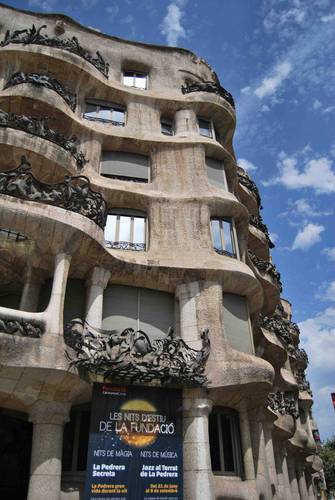 From Prague To Atlantic Coasts IV.

From Prague To Atlantic Coasts V.

From Prague To Atlantic Coasts VI.