From the last part you may recall mention of the fascinating works of Antonio Gaudi, whose style is hard to grasp, at least in my eyes is in the plains lexicon dreamy ideas. Gaudí in Barcelona, ​​however, left the other links for generations of its inhabitants. If not the most important, the largest monument in his masterful skills of the Sagrada Família.

In translation, the title of this monumental Christian church, which is most easily reached from same named Metro Stations, should sound as the Holy Family. You can find today in the already dense area, although in the beginning, at the start of construction work, was located somewhere in the vast fields of town. This is demonstrated by historical photographs, which can be found in the museum dedicated to the church, which is located directly beneath the temple. Today, the Sagrada Família is part of the urban district of Eixample, for which the same as for other central part of Barcelona, ​​the typical very dense area (approx. 36 thousands inhabitants per km²). Temple, which began to build in 1882 will impress you by its unique monumentality. It is even more amplified when you like us, it will see after been disentangled from the square grid of streets. Similar as Casa Batllo also for the Sagrada Familia a long queue of tourists is typical. 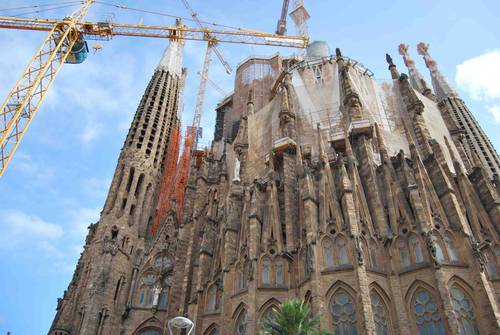 Those tourists by buying a ticket contribute to the completion of construction, which is

estimated to be around in the next ten years. However, as with similar projects is, completion estimates and final costs are almost unpredictable and usually the longer the horizon for completion is required, the longer it is prolonged and expensive. Anyway, assume that the entry into the heavenly sanctuary mainly families get to the work site. If you looking up will note especially the structure of pillars, that should commemorate the forest.

Noteworthy is also an outdoor facade with countless scenes from the Bible. In the museum under the temple can be in addition to the aforementioned historical photographs and miniatures to see how the building should look like after completion and descriptions and explanations of the symbolism of its architectural elements. 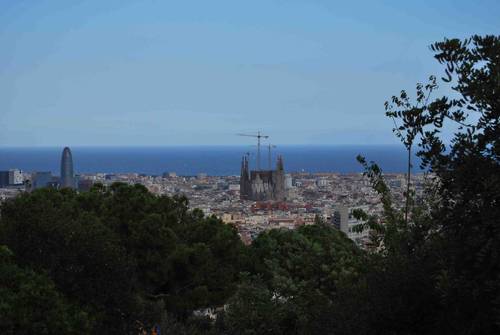 e Site, which is located in the northeast corner of the city. Probably the closest it will be from the park near the Vallcarca station.

Once you're behind its gates, at least for an hour or two of you can hold the spell. An oasis of calm in busy city will give you a break for a while from the streets full of cars, people and other sectors. The park contains several interesting buildings that would be a great shame if you accidentally leaked. One of them is the Casa Museu Gaudi, Gaudi's original residence in 1906 - 1925, in which up to believe that in such "uninteresting" building architect lived.

If you will walk more in the part, try to get to one of the highest points of the city, which is a large Christian cross, standing on a heap of stones. Will you look at Barcelona, ​​as if you would have it in your open hand. Ubiquitous musicians and generally relaxed mood will make you staying in park much more pleasant.