en.infoglobe.cz » Switzerland: Basel and Surroundings I

I would like to mention my second visit more in detail. It was more unusual - we came here to support our favorite hockey club competing in „Basel Summer Ice Hockey 2010“. 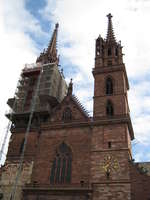 Our team played three matches in four days. Obviously, we wanted to spent free time between matches by exploring Basel and around.

Our group of about 15 fans arrived at place and accommodated ourselves in two hostel rooms in the center of the city. The hostel had been newly renovated, everything was clean and modern. Staying there meant that we didn’t have any privacy. You stumble over all kinds of things (in our case these were our fan gear and beer). But you soon forget lack of comfort. Being with a group of friends, sharing a kitchen and dinning room with various people had one great advantage – we had a free public transportation ticket that was valid during stay. So we could travel without problems not only between hostel and hockey stadium but also around all the city.

St Jakob Arena is home arena of EHC Basel club and place where the tournament took place was right next to St. Jakob Park, the largest soccer stadium in Switzerland. It is a home stadium of FC Basel that plays in the highest football competitions.   We had a chance to visit both stadiums and also near fanshop. 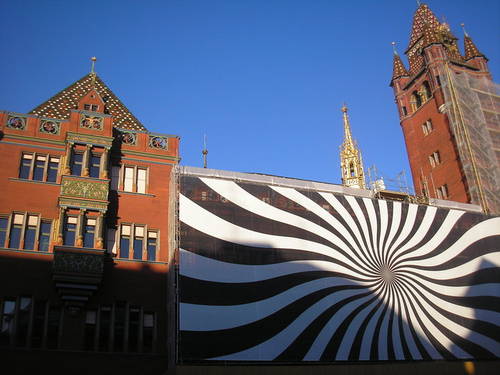 One of main tourist sights in the city is Basel Minster. If you take a guided tour you can get to one of towers. There is a really beautiful view of the city center and the Rhine and on both banks. The city lies on the. Inside the cathedral there is also a memorial of Desiderius Erasmus , Dutch theologian.

Near Market Square there is a town-hall built in the 16th century. It is decorated with frescos inside and outside. During our visit there was a renovation of outside façade, so we couldn’t see it whole.