Along the road heading to new shopping mall, there is a chateau with a park behind a wall. We entered it on the bike through beautifully decorated iron gate with bars. As we have learned, the gate originally decorated Austria-French pavilion in the World Expo in Paris in 1900. Then buildings such as Museum d'Orsay, Alexander III bridge, or monumental Large Palace. Also the first line of subway in Paris started its operation. Also the second summer Olympics took place there. 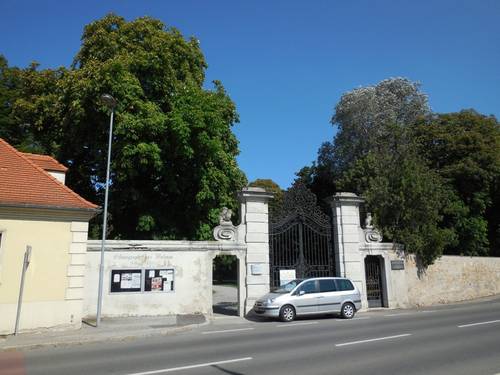 Upon entering through this symbol of master-smithery we found ourselves in a different world. It was a world of maintained greenery, small ponds, blossoming flowers, and white gravel roads. After a while we found ourselves in the middle of this complex. There we saw Neues Schloss, New Chateau, built in 1688 by Count Johann Listy. Originall,y a large farm was there. However, reconstruction made it a renaissance building. Prince Esterházy rebuilt it in the Baroque style. Later, House of Batthyány was there. We have seen its coat of arms above the main entrance to the chateau. 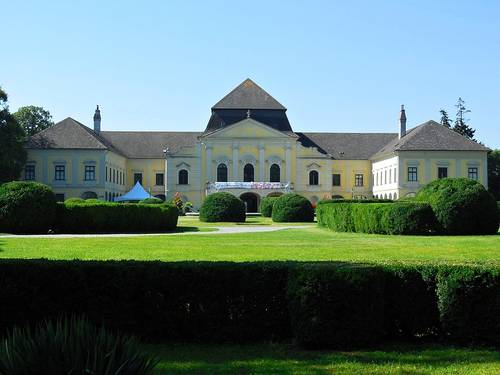 The chateau was used as a noble family residence, for representational purposes, and many weddings took place there, as well as concerts of famous Joseph Hayden that were attended by Maria Theresa. In 1969, the town became the possessor of the chateau. It renovated the building and opened it to the public. As we had planned many stops, we did not visit the etnographic museum with large colleciton of folk architecture from eastern and southern Europe. We just enjoyed the chateau from outside. 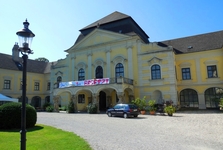 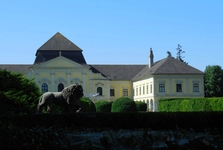 After we were done enjoying beauitufl sunny moments in chateau park we moved on. Next to one way railroad we passed by family farm. Suddenly we stopped. One of the gardens offered unique view on a scaled kingdom , crossed by a railway. It was a fascinating scale model. It was dominated by a fairy-tale chateau. This unexpected stop made us smile and admire this work at the same time. 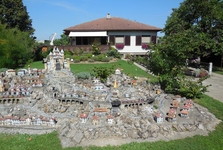 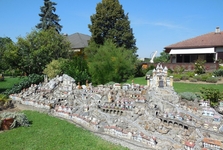 Pama – A Town in the Middle of Fields 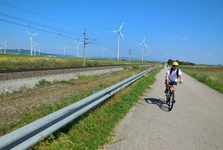 Five-minutes of bike ride later we changed the direction. We rode below the highway, and continued along the railroad, and large windmills to another Austrian town of Pama. On the road we have seen Small Carpathian Mountains and Bratislava. The surroundings of the town consists of fields and small tree islands, or rather tree alleys. Upon entering the town our steps headed to a bit atypical church , that a portal For a while we walked around and then we moved to a longe square. The square consisted mostly of stripe of greenery where some memorials were located. There we decided to have a lunch. We took some refreshments from our backpack and enjoyed local atmosphere in silence. In the guidebook we have read that Pama had difficult history due to Turkish wars which resulted in population decline. Thanks to Croatian migration, however, the population increased. This information explained occasional Austrian-Croatian board with two language text. Living remnant of migration are Holy masses that have been held up to the present. Next, we have read how almost the all bundesrepublik was affected by hungarization and it was incorporated to Hungary. Due to Treaty of Trianon signed in Versailles the town became part of Austria in 1921. A takto obohaceni informacemi z historie jsme se pomalu začali připravovat na odchod. 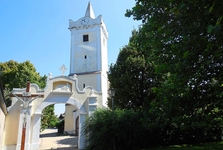 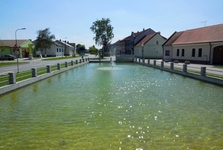 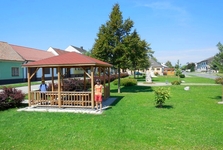 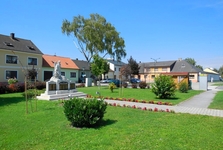 We felt comfortable in Pama. It was, however, very weird that we met nobody, and it was Sunday. We agreed that all inhabitants rest, or they went hiking somewhere. After a short rest we set off to the easternmost town in Austria. It was in the direction to our goal Trojmezi. We will tell you more about it next week. 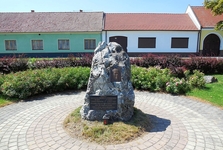 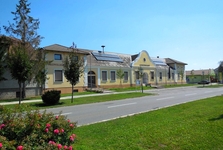