With good mood and necessary equipment for biking we went towards adventure. Our meeting point was at Hranicaru Square, Haje district. From there we moved to the part of Petrzalka known as Kopcany. There a new, beautifully marked and safe bike trail leading to the border with Austria. Suddenly we appeared at border crossroads. The way leading right headed to military bunker BS-8, i.e. border crossing Berg. From there we took a bike trail from Wolfsthal to Schloss Hof. Left and pointing straight path Slovaks well known to the Austrian town Kittsee, the only difference in mileage. We chose a shorter route, ie straight, because we had plan the day still many stops. 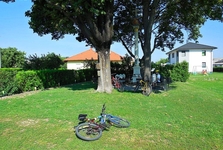 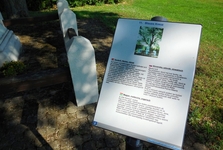 Along the flat road after about 10 minutes we reached the town of Kittsee welcomed us with first but not last architectonic sight. It was Blue Cross (Blaue Kreuz). Very pleasant surprise was a trilingual board explaining the sights. As we had learned, it is a reverential sight built due to unspecified tragic event. This smooth column with richly decorated head has the coat of arms of the House of Batthyany (noble family) with the year 1752 isncribed on it. Near the column there are benches where we rested for a while and then moved on to the downtown. 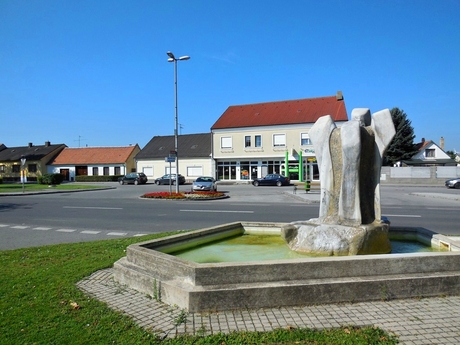 Kittsee, Kopcany in Czech, is an Austrian town in Burgenland. The town neighbors two Bratislava districts, Petrzalka and Jarovce. Near the latter there is even official border crossing for road vehicles. Thanks to good climate Kittsee and terrain the place is proud for breeding apricots. Of course, in September you wouldn’t find here such fruits. Vineyards, however, are plentiful there. 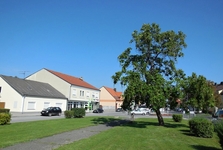 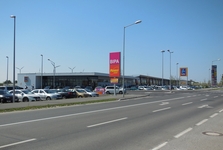 When we gradually moved to the downtown, we didn’t even already nepozastavovali the fact that more is here to hear Slovak & nbsp; than German. Kittsee is another Austrian village, which enjoys great popularity among Slovaks, as evidenced by the addition exuberant building houses newly built shopping mall. 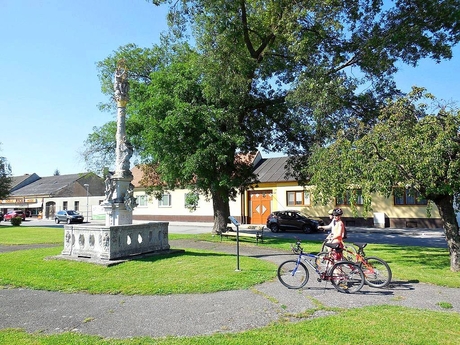 The center of the town consist of a well-maintained park with flowers and the road is lined with family houses. On the one side of this “square” there was an artistic fountain. In the middle of the other there was a beautiful Marian column of the Holy Trinity. On the column were statues of St Roch and Sebastian, relief of Madonna and St Trinity dating to 1727. We stopped for a while here. Right at this place we saw a large church tower of the parish church "zur Kreuzerhöhung", built in Romanesque style. On its place originally was Old Church of St Pankrac destroyed durig Turkish raids. After it was built again it burned down to the ground. Later it was built one more time and again destroyed during the second world war. Today’s church was therefore built only in 1952. 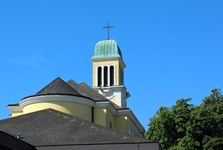 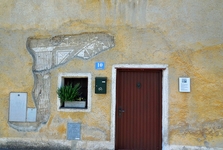 Because the church was closed. So the only thing we could do was to enjoy it from the outside. And outside we admired another sight near the church. It was Altes Schloss chateau or Old Chateau in English. The interesting thing about this castle that used to be in the middle of the lake on the old arm of the Danube. Today it is surrounded with buildings and a parking lot. As this 12th-century castle is in private ownership it is closed to the public. We hope that once we might enjoy it also from the inside. Having enough of history and sights we directed our two-wheeled vehicle to the street guarded by nobility houses. We wanted to get to the greatest tourist sight in the town, Neues Schloss chateau, New Chateau in English. More one it we will tell you next week... 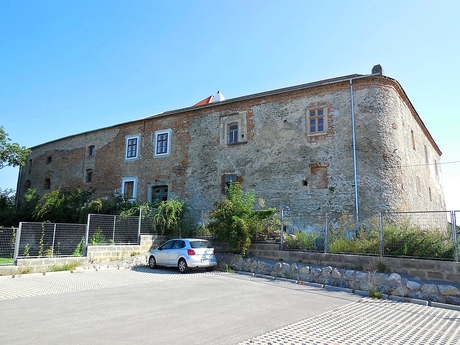