Right the first sight we saw was the St Nicholas church. Located on Osvoboditelu square, this Gothic structure was built in 1280 on the foundations of much older edifice. A church used to be there even before Liptovsky Mikulas (at least according to historical written sources). In has changed its looks through the times, perhaps most important one happened in the 18th century when the church saw a Baroque renovation. Upon entering inside we noticed details dating to the Middle-Ages, wall paintings, and an altar in the Gothic revival style. We sat for a while to enjoy even more the mysterious atmosphere of this place. 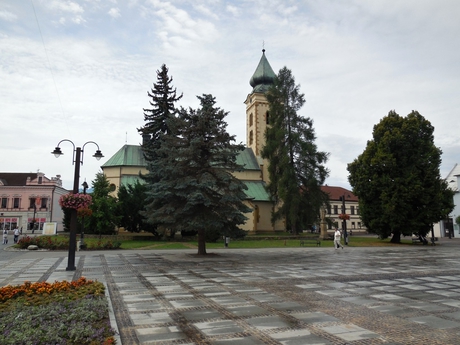 When we continue to other sacral buildings, we shouldn’t leave out the evangelic church in the Classicist style, the Jewish synagogue , the former Jesuit cloister which hosts the Environmental Protection and Speleology museum. Another place worth your visit, is the former Catholic House once a parish and the birth house of the composer and author of Kovac Wienland, the first Slovakian opera,– Jána Levoslav Belly. We, however, were interested in the square lined with townsmen houses dating to the Renaissance, Baroque and Classicist periods. As the architectonic styles changes so do their façade colors making an extraordinary view to look at. 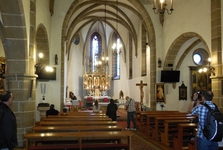 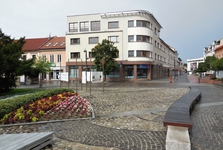 In the center of the square you can find the late-Baroque Zhupa house, today the district office building. Behidn it, the interesting Metamorphosis fountain stands as some kind of honor to famous persons born in Liptovsky Mikulas. The main lpace is occupied by the statue of the professor and inventor Aurel Stodola, a teacher of Alber Einstein. The fountain is a popular spot for water sprinkling around as well as for its artistic design. 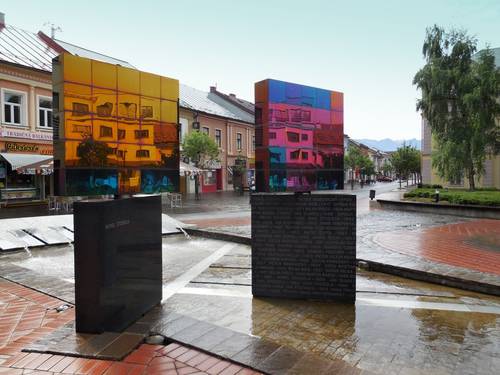 We also saw the so called Pongrácovska Curia , the second oldest building in the town. They say Juraj Janosik’s tribunal happened there, but other sources say it happened in a municipal building nearby. In the present, the latter is the residency of the Koloman Sokol Center which displays the best works of this significant Slovakian graphic designer and painter. Another place we found interesting was the Strauss House, which hosts the Museum of Janko Kral. 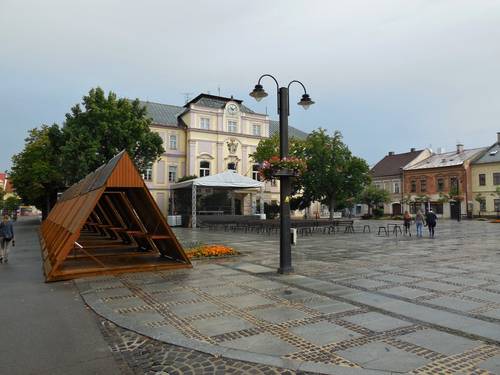 The building known as the Black Eagle is also worth paying a visit. It used to be an inn with theater. This place was the center to social life in the city and also a place where many historical events happened. One of the was declaration of unity which a state designed by the Czechs and Slovaks. Today, it hosts a library and Liptovske Museum’s exhibition halls. 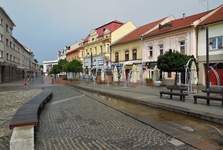 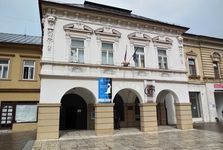 You can take a walk in green parks, or if you want to do some sports to Ondrej Cibak’s Whitewater Slalom Center on the Vah. It is the oldest sports center of its kind in Slovakia, or just visit one of the shopping malls. 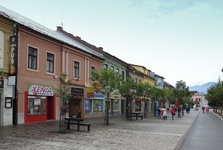 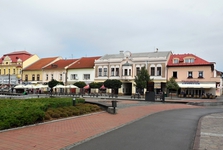 We learned that we were in the town of Olympic winners. This name of honor was given to Liptovsky Mikulas by the Slovak Olympic Committee in 2004. It is the only Slovakian town that has two Olympic winners (Michal Martikán and Elena Kaliská), two world champions in hockey (Jerguš Bača and Marek Uram), the winner of the Stanley Cup (Martin Cibák) and many other exceptional sportsmen. People like Janko Alexy, Martin Rázus, Janko Král and many more made Liptovsky Mikulas the cener of cultural and social life in the region. It is fun, enchanting and we will most certainly return to the town in the future.

Published: 25.10.2020
In recent years, modern tourist attractions - galleries of optical illusions - have been added to Slovakia, like mushrooms after rain. You would already find them in every major city. The most famous are certainly the galleries in Bratislava (Tripland), Starý Smokovec (Tricklandia) or Bojnice (House of Illusions).

SK, Liptovský Mikuláš – A Rest in The Region Popular Among Tourists

Published: 20.9.2020
Liptov is one of the most beautiful and most popular tourist regions in Slovakia. If you want to spend pleasant moments here, enjoy nature, but also culture, we recommend choosing perhaps the most comfortable accommodation in the whole region, which is also affordable!

SK, INFOFEST – The World Gathered Around in Liptovský Mikuláš for The Third Time

Published: 13.9.2020
This year, locals as well as visitors to the city had the opportunity to visit the international travel festival Infofest 2020, which during the first weekend of September brought not only the experiences of professional travelers, but also a remarkable accompanying program.

Published: 16.8.2020
The Infoglobe portal, in cooperation with the city of Liptovský Mikuláš, is organizing the third year of the international travel festival Infofest, which will take place on Friday the 4th and Saturday the 5th of September on Osvoboditelů Square and in the cultural house in Liptovský Mikuláš.