The gorge was created by small river streaming through the White Mountains and Mt. Volakias. The gorge is 16 kilometers long. Final 3 kilometers are nut under the national park. Usually, the hike starts at 1250 meters and continues to the moat at Agia Roumeli in the Sea of Libya. However, you can walk in the other direction. Local rangers take care of safety of visitors. You will certainly meet some of them on your way. The gorge is open from May to October. But its accessibility also depends on weather. 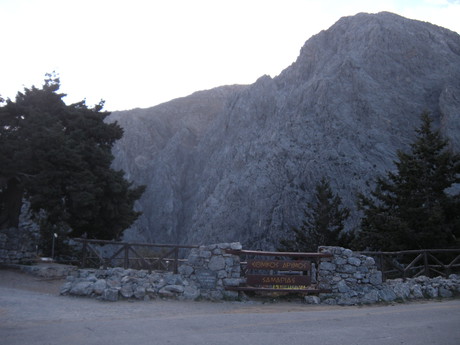 Pine tree covers the gorge (Pinus brutia). Formerly it was exploited for construction, as fuel wood, or resin. The entire park is under high fire alert because of it. It is strictly forbidden to smoke here or making a fire. Administrators realize the danger therefore there are extinguishers on every kilometer. 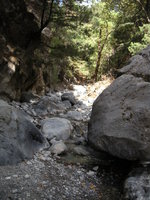 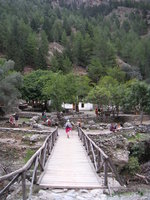 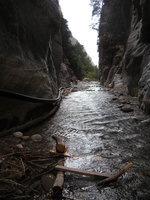 The hike from up the gorge to its moat takes about 5-6 hours. It depends on your stamina. Also on the number of breaks. In the upper part of the gorge there is a small café and a parking lot. Buses and cars go there. Most of tourists start at the sea or up at the parking lot. Then they go through the entire gorge. At Agia Roumeli, they board a ship and travel either to Hora Sfaklion which is to the east or to Sougia or Paleochora which is to the west. 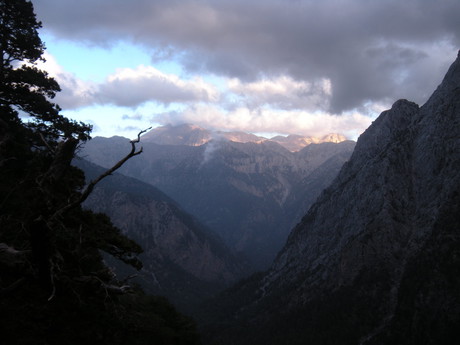 Initially we intended to set off pretty early in the morning from Paleochora and reach Sougie. A bus Omalos village was supposed to depart at 7 a.m. In the main, however, the bus rides only on Monday, Wednesday, and Friday. We were there on Tuesday. Therefore, we had to travel by 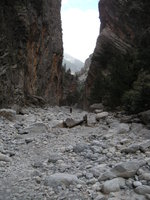 car to Omalos and back. We realized we had to drive fast in order to return until the sundown. It was the only relevant option for us.

At five in the morning we set off from Xyloskalo downhill. The signs on the road are greatly done. There are several rest areas along the road and you can refill your water supplies. The upper half of the gorge is wide open. However, the gorge narrows down and its narrowest part is called Sideroportes (the Iron Gate) and is only 3 meters wide. The walls are several hundred meters high. You need to hop over the stones in order to get through the Iron Gate. At more spacious places there are footbridges. What is left of the village can still be seen Samaria village. You can refill water there. Also, there is the park administrator. Many tourists frequent the place when they go from the sea or the other way round. It is bit crowded there as we witnessed. 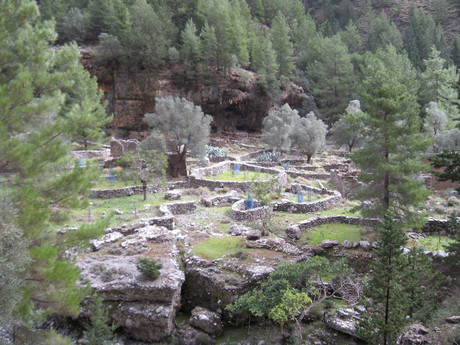 Four hours later we reached the bottom edge of the park. However, we didn’t got to the sea because it would mean we would have to pay 5 euro admission fee. Moreover, we didn’t have much time. The number of tourists dropped and the other half of the gorge we were there almost alone. The only people we encountered were rangers. They warned us that it was too late and we should hurry out of there.

The trek ended around 6 o’clock. We were absolutely tired. We were truly lucky because. Once we get into the car, the rain started pouring. We hardly saw anything. After a ride down to Paleochora we would hove some good dinner and got into our sleeping bags.

We tell you more about our journey across Crete in the next part of our article series.