The first stop on our way was Rethymno, Crete’s third largest city. It is situated between Heraklion and Chania on the northern coast of the island. The main sight in the city is the late-16th century Venetian fortress . It looms above the city. Even if you don’t include the fortress in your itinerary, I recommend to go up the hill to the main gate. From there you can view the city and the sea as well. Another interesting attractions is a Venetian-style harbor where many restaurants and bars are situated. Staff there surely wont let you pass by easily. We couldn’t resist to sit down at one of them and observe clear sea water and an elegant 16th century ighthouse. Only small boats are allowed in the harbor. Therefore, there is nice and pleasant atmosphere. 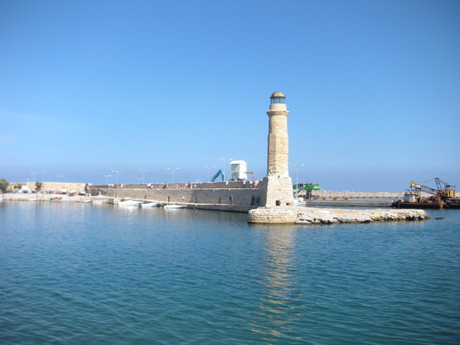 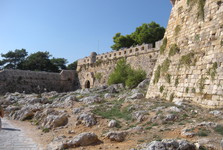 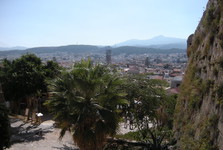 One short break after we continued westwards to Chania, the second largest city on Crete with 55 thousand inhabitants. Chania was called Kydonia in the times of the Minoan civilization . Archeological excavations on Kastelli hill gave evidence to its existence back then. This, however, is only a small fenced area. You don’t have to pay anything there. Between the 4th and 9th centuries AD, the Arabs ruled over Chania. They expelled Christians up to the mountains. In the 10th century, the city became part of the Byzantine Empire once again. Chania then became the seat of a bishop. The Venetians had ruled over the city since the 13th century. They walled the city but these proved not enough against the Ottomans who captured it in 1645. They had stayed there until the end of the beginning of the 20th century. 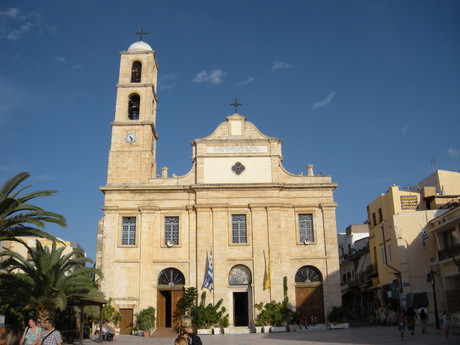 German army bombed the city intensively during the WWII. Many important sights were damaged or completely destroyed. Some buildings were renovated after the war. Until the 1972, Chania had been the capital of the island.

It was on the road which run along the coastline where we began our tour. It led us to the Venetian port in the city center. There are many restaurant and bars in the port. We intended some fresh fish. However, the prices were unpleasantly high. Fish is usually cheap at seaside resorts. The prices here were around 20 euro. Pretty expensive for our taste. Eventually we couldn’t resist to take a seat in one restaurant. We enjoyed the view of „Janissaries“ mosque while sitting on the opposite side of the port. The true name of the mosque is Hassan Pasha. Built in 1645 (the year Chania was seized by the Turks) makes it the oldest Turkish building on the island. The renovation is well done except for a concrete dome. 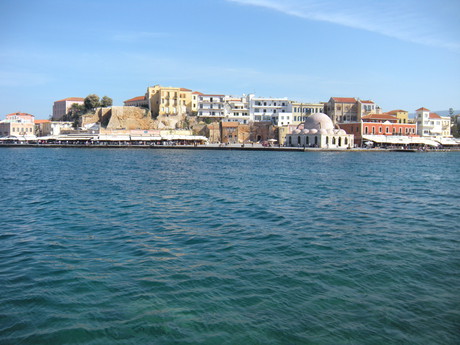 We were denied from entering the mosque. Therefore, we stood outside and marveled at it. We set off for a tour in the afternoon. It took place in the main cathedral. It is situated adjacent to the busiest avenue in the city – Halidon. Vendors there sell anything you could think of. Anyway, the cathedral was built in the second half of the 19th century. It pleasantly surprised us despite its modest interior. Then we continued up to Kastelli hill. Through fence we could observe excavation sights of the Minoan civilization. The archeological works have been in work since 1966. The oldest findings are located in the Chania Archeological Museum . Our tour ended on the city wall and a climb up to a spot with magnificent view. 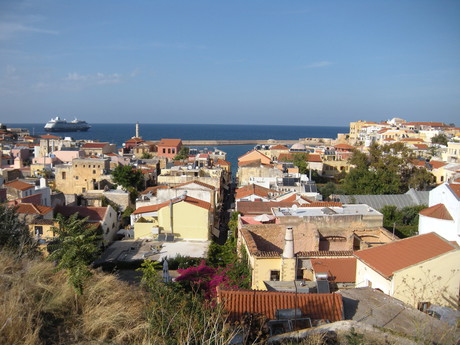 There is much more in the city. Because the daylight was slowly gone we had to go toward a camp nearby. We had delicious dinner and beer which we deserved. Then we slipped into our sleeping bags and looked forward for the following day. Next Monday you will learn how it eventually went.