We reach the car park by Ellan Wood by following Station Road street, Carrbridge. The trail begins by the information panel in the car park. We follow the yellow trail leading to pine forest. By turning right on the first crossroad we go straight on to another crossroad. Soon we reach the fenced Landmark Forest Adventure Park. It is a family amusment park with different attractions such as labyrinth, rollercoaster, climbing wall, shooting range etc. The compound is open also in winter. However, only some attractions are accessible. For instance, you may visit the butterfly house. To our surprise, we don't meet anyone there. So, we go inside the butterfly house for free and then we go up the Fire Tower. This observation tower has 105 steps. On the very top there is a 360° vista over the entire Cairngorms National Park. The weather is great on this day. So be sure to really visit this observation tower. Those lukier of you may see even the second highest mountain in Scotland –  Ben Macdui (1 309 m) or maybe even Cairngorm Mountain Railway. 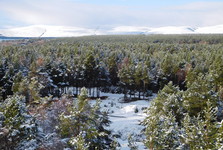 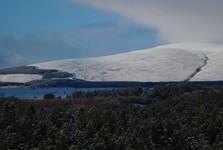 Upon enjoying the vista we move on through forest. For a while, we follow a railroad track till teh trail gets us back to Carrbridge village. Then we walked through a homestead with horses running freely within a boarded fence. Horses are friendly and let you stroke them. Another boarded fence was a home to the bull itself. Here we can finally see it from up close and stroke furry cows (highland cattle). 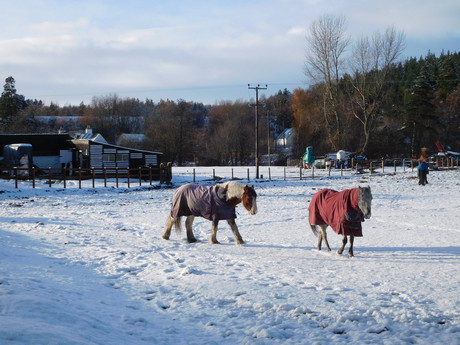 Then we finally reach the center of Carrbridge. The village is, like Aviemore, a ski and tourist resort. There is one more thing why it lures in visitors for there is one of the oldest stone bridges in Highlands. It was built to link the riverbanks of the Dulnain River in the year 1717. During the great flood of 1829 it was damaged and has remained so. It is not open to the public yet tourists may see it from special observation spot where you may take a nice picture of it. The bridge is trully beautiful. Pitty that it is situated right next to the main road. In addition to that, there is a souvenir store and a small post office both right opposite to the bridge. Then we turn to a street which would guide us to the car park. 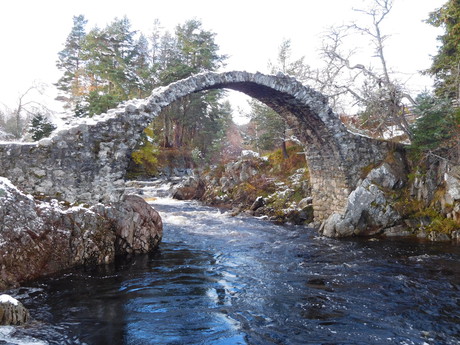 It is getting darker so we set out back to our guest house. However, we make one more stop at local train station as there regularly rides through a steam engine. The train station is beautiful but we don't see the steam engine. We pass by several possibilities to try out clay pigeon shooting, a certainly popular activity around these parts. 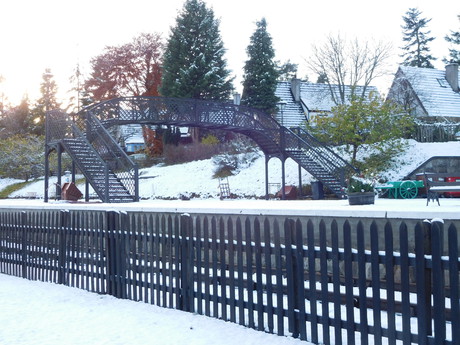 We stop for dinner at Happy Haggis bistro situated not far from our hotel. The bistro's ame goes by the traditional Scotish meal of haggis the main igrendience of which are minced sheep viscera with addition of spices, oats or semolina. All together the ingrediends are boiled in sheep stomach. Haggis' final shape is of an ugly, greyish ball. And how it looks is how it tastes. Fortunately, we already did our tasting of it and order fish&chips instead. Have local beer for drink. It is bottled yet very stylish. One sort goes by the name of  Nessie (as of the famous Loch Ness monster) with the depiction of the creature on the beer label. Finally, we say our farewells to the beautiful Cairnogrms national park.