The national park goes by the same name as the  Cairngorms mountains. Founded in 2003, the park features five of the five of the highest mountains in Scotland. The highest one rises to 1309 meters. Skiers, cross country skiers, rock climbers, and glacier climbers will love this place surely. In summer, the national park is popular among bikers, and enthusiasts of water sports such as windsurfing, canoeing, or sailing. You may make hikes in the park all year round. 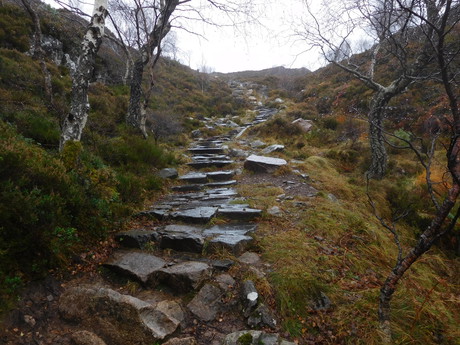 We find the accommodation right in Aviemore. We discuss how we should spend the afternoon and the following days. There are many trips into the surroundings on offer. In slightly foggy weather, we make a two-hour trip up to Cairn mountain situated nearby. We join  the Craigellachie National Nature Reserve trail not far from our guest house. While climbing up forest up to the mountain we pass by the beautiful lake Loch Pulladdern. MIsty hase veils the forest in mysterious atmosphere. Unfortunately, drizzle becomes strong rain soon. As we get higher and higher, rains changes to wet snow. When encountering some wet tourists we don't feel disheartened. Soon we reach our destination. Broadleaf forest changes to dwarf pine forest and even higher there is rocky terrain and heather. The vista here is anything but great. Despite this the walk through beautiful Scottish nature is amazing. By following the same route we get back down. Later we will make a short walk around the lake. 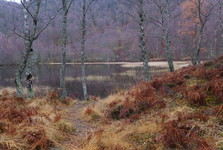 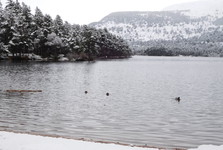 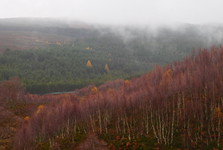 A pleasant surprise will wait for us on the following day in the morning. It got really cold in the night. This completely changed the landscape. And finally, the rain stopped. The sun shone and occasionally there was snow. Rabbits, squirels, and birds moved around in fresh snow because the staff put there a small feeder. However, we don't hesitate. Right after the breakfast we embark on the trip. We plan to go about 7 kilometers around Loch an Eilein lake situated in Rothiemurchus Forest. This trail is one of the most popular short walks inScotland. Moreover, it is very close to our hotel. 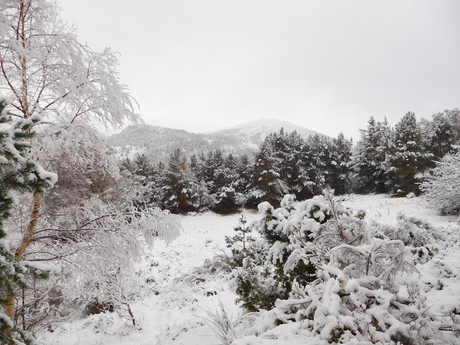 You may reach the lake quite comfortably by car. There is even a car park from which we set out to Loch an Eilein. On our right side inside a white building, we notice a visitors' center. Then we move on along a forest path closely following the lake. Soon we notice the ruins of a castle  on the island in the middle of the lake . This is the attraction which lures in tourists in large numbers. 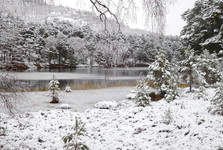 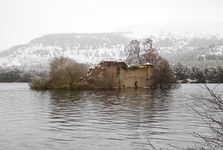 It is a gorgeous vista in the winter landscape. We highly recommend you to take waterproof boots. Moreover, this one is not a difficult trail. Rather, it is a nice walk where you take a number of beautiful pictures. It is estimated that the trek takes about 2 hours. However, we made it in mere hour and half in moderate pace. Yet this doesn't matter.  Cairngorms national park offers a great number of long and short trails and all of them are amazing.