en.infoglobe.cz » Italy, Florence – The City of Titans of Art

We begin our tour on Piazza del Duomo. There are some of Italy's most important

landmarks. Last week we concluded our tour in the baptistery of St John situated on the very same square. Opposite to the baptistery, there is cathedral Santa Maria del Fiore. The construction was commenced at the end of the 13th century. Arnolfo di Cambio, the architect made the cathedral in Gothic-style. Perhaps the name doesn't ring a bell yet in his time the architect was very famous. He made the famous Charles I of Anjou statue, or St Peter's bronze statue inside St Peter's cathedral in Rome. However, the Virgin Mary cathedral in Florence was finished in 1436 after architect's death. 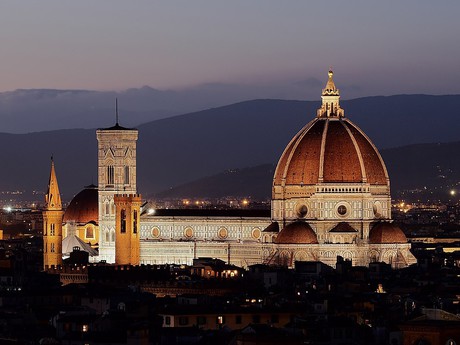 Palazzo Vecchio (the Old Palace) would be our next stop. Situated on Piazza della Signoria, the palace has always been the town hall. The Medici ruled Florence and the  Florentian republic from here. The town hall doesn't seem much like a palace, however. It rather looks like a fortress which even has a secret staircase and hidden rooms which you may see at one of the guided tours. In the evening, you may enjoy the vista over the city during beautiful sundown. But don't forget to book your place ahead! 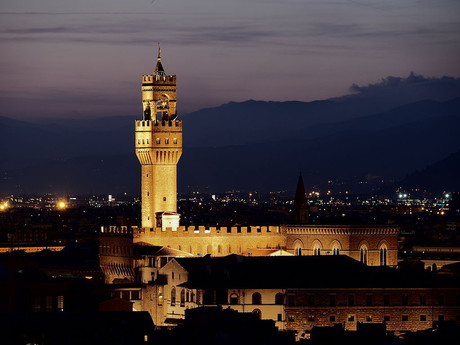 Built in the 14th century the palace stands on the ruins of old Roman amphitheater wchi you may see in town hall cellar. Salone dei Cinquecento (the Hall of the Five Hundred) is the highlight of the palace. The hall is incredible 54 meters long, 23 meters wide, and 18 meters high. Casette ceiling is adorned by beautiful paintins, statues stand on the sides of the hall. The paintings were done by the most famous artists of the era – Michelangelo and Leonardo da Vinci a Michelangelo. It was the first and the last time the two artists worked together on the same work. Leonardo created the Battle of Anghiari, which is lost. Michelangelo made the Battle of Cascina, which was left unfinished and than vanished. 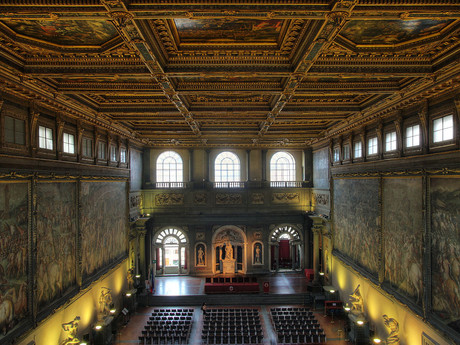 visitors a year). The gallery is housed in the palace built at the end of the 16th century. Originaly designed as offices for government officials (as the name uffizi - offices suggests) was later repurposed. However, some rooms were used to display works of art from the very beginning.

Once the Medici died out, their vast art collections were given as a gift to the city of Florence. Only a part of the collection fitted inside the gallery. The rest was spread out to other galleries in the city. Uffizi displays such famous artists as Caravaggio, Rembrandt, Raffaelo Santi, Albrecht Dürer, Leonardo da Vinci or Botticelli.