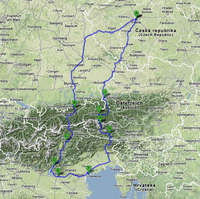 planning a vacation for several years I respect proven rules that one year we will spend some time at sea, a typical last-minute systems as of least resistance, and then the next year travelling around the surrounding states, and the journey itself symbolize the legendary goal. With my girlfriend we visited Zakynthos last year, which subsequently appeared on several articles, and so this year should be marked highways, mountains and camping. The last similar traveler vacation took us to the Slovak Paradise, Murano and Low Tatra mountains, so we decided to head for once in southern landscapes. Plan of routes and stops is not original certainly, but from our experience we can highly recommend it.

m, with variable deviations from it were not for harm, quite the contrary.

Our means of transport should be time-proven Mercedes-Benz C 220, Diesel-combi car of the year 2006 with 2.2 litre engine and more friendly than using less than 6l/100 kilometres. The minimum possible investment to the fuel was one of the conditions of the journey, and this fact had to calculate where best to add fuel and where the petrol stations rather avoid.

As the years we know the summer always tanking is a bit more painful than in the rest of year. Prices of petrol and diesel offending record boundaries and it is not only far in the CR, respectively in the Slovak Republic. While litre of gasoline (diesel) in the Czech Republic to take a roughly 37 CZK (36.50), in Germany the price is around € 1.62 (1.47) and even Italy, € 1.77 for diesel nat95 and even 1.70 € ... With all the most favourable fuel prices will then meet in Austria, where the Natural litre costs around € 1.45 and € 1.40 diesel approx.

Prices are only indicative and it is good to check current rates with average fuel prices in the destination search. More generally it is valid, the best is to buy fuel off the main highways, so if you saved a few cents worth finding smaller village pumps. The ideal schedule buying fuel for our journey was that of Bohemia ride with a full tank, if possible, before taking another Brenner on the Austrian side, another 600 km on the last tank and Italy will be added back to the way the Austrian Carinthia. Overall, the budget should be on fuel about 4000 CZK to 2000 kilometres, including Alpine climb = about 3 tanks.

Perhaps this will start and maybe a little boring post discourage 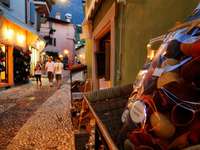 d from further reading. Let's hope not, so we can look at another pivotal point on the planned vacation and that was the bed. As a relatively young adventurers, we are not against the grain bed to use the plan offers Austrian and Italian camps. However, the condition was to hit the road as far as possible in the first half of July, respectively before 14 – 15th of July, when Southern neighbours to begin late holidays, during which changes in parking Brenner, and all camps are bursting at the seams. Surely you have experienced a similar situation, but just a little, so go early and nothing like you to meet them. We went on 117, the first day was to Lake Achensee Tyrol near Innsbruck, which we have recently written. The very first day you will beat the longest stretch of

road, about 500 kilometres, relatively boring highway through Plzeň - Rozvadov - Regensburg and Munich. Austrian highway for 10 days more than enough and the standard price is € 8. The fine for driving without a mark is about 120 to 150 €!

Before the journey it is also a good way to identify the driving camps in the area and certainly not bet on a single, provided they do not already have a prior reservation. The offer can be found on http://www.ecamping.at and many others.

More about the lake, our and maybe also your first stop on journey across Europe can be found in this article.

Austria: Great Skiing around the Corner