Similarly exciting is the The Amazing Adventures of Spider-Man.

You put on a pair of 3D glasses, sit inside a car and start a journey of young, inexperienced journalist who observes Spider-Man during the most perilous night of Spider-Man’s life. He meets his greatest foes such as Hobgoblin, Dr. Octopus, Hydro-Man or Electro. They attempt to steal the Statue of Liberty in New York. Spider-Man is the only one who can stop them.

The attraction has been awarded many awards. It was opened in 1999. However, four years ago it was modernized and received state of the art technology. Do expect unpleasantly long lines, however. 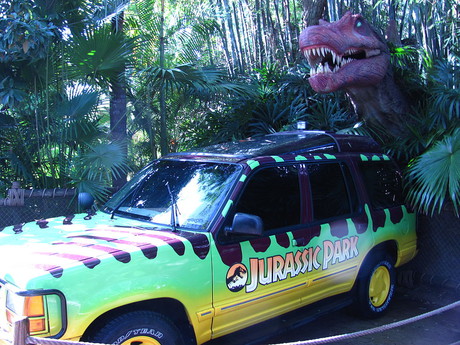 a tetralogy of the most popular and probably the best movies with dinosaurs? The Jurassic Park at Islands of Adventure is set in the events slightly after the first movie. You can see, for instance, John Hammond, the very founder and visionary of the dinosaur park.

Soon you will be captured within the illusion of being in a real zoo with dinosaurs brought to life. Expect attraction which would be in the “real” Jurassic Park.

The Jurassic Park River Adventure is such an attraction. On boat you sail down the river (for about five and half minutes) to see many dinosaur species. There is a huge ultrasaurus feeding itself on water plants. Also, you can see a stegosaurus. Soon, however, the peaceful ride will change into wild adventure… 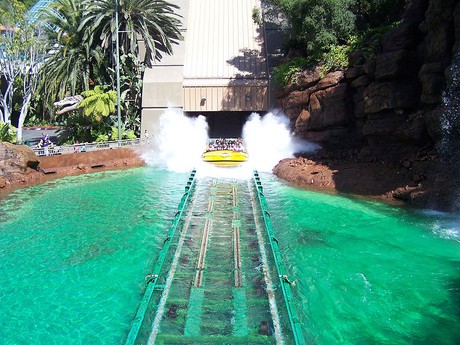 Easy attraction which can calm you bit down is Triceratops Discovery Trail. It is basically a nature trail which leads you to three triceratops (those of you who have seen the Jurassic park can probably recognize the scene from the movie). The mechatronic replicas are very well made – they simulate breathing and other bodily functions.