You have to always enter exact place of Lower Mainland (e.g. Surrey, Burnaby...) else you won’t find your address. The city shore enters the Pacific Ocean thanks to which the city boasts with very specific atmosphere. Downtown is surrounded by the ocean even in the north, south and southwest. 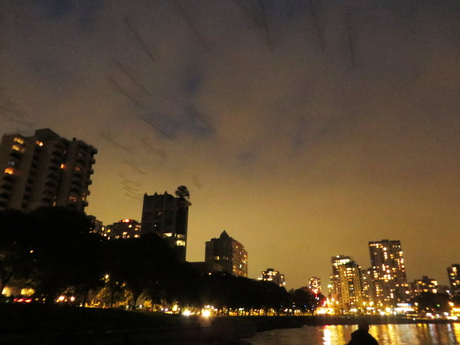 As for tourist activities, many holidaymakers rent a bike and ride along the ocean. You can rent a bike for the most affordable in Denman Street. It would cost you 15 CAD (around 290 crowns) for six hours, enough for a pleasant ride. Also you can rent roller skates in this street. Lower Mainland has many nice parks and also very popular bike trail that goes along the ocean . 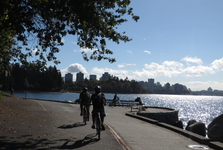 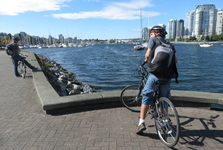 The most common means of transport in the area is SkyTrain (something between a subway and a train). It rides above ground on its own bridge. If you happen to be heading to downtown, the bcackground to skyscrapers will be green (or white, in case it’s winter) hills often veiled in mist.

Are you interested how the city looks up from the hills? One tye of view is fromGrouse Mountain, North Vancouver. You can get to the foot of the hill by riding the skytrain (either yellow Millenium or blue Expo line) to Waterfront, the terminal station. There you cant miss arrows that would guide you to the SeaBus – a boat that operates within municipal public transportation. The boat would take you up to North Vancouver. The catamaran departs every 15 minutes. It will take you right to the bust station. There you sit in the bus number 236. It rides below Grouse Mountain where the terminal station is. A one-day ticket costs 9,75 CAD (about 190 crowns). Be sure to plan such a trip when the weather is nice or else you wouldn’t see a thing in dense cover of clouds. 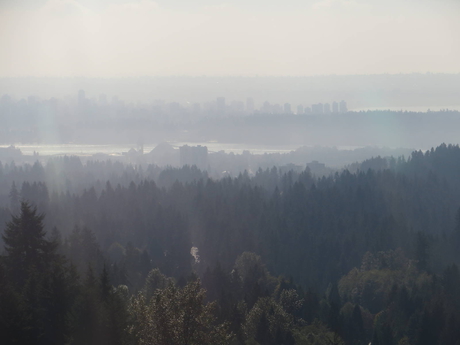 You can get to Grouse Mountain either by cableway or afoot. Should you decide to hike, then you have to enter the trail to your right if you stand at the visitor center facing the mountain. You can recognize it thanks to fence boards warning about the steepness of the trail. It is truly difficult. The trail goes across private property that is fenced at some places. In 17:00 the gate closes down. 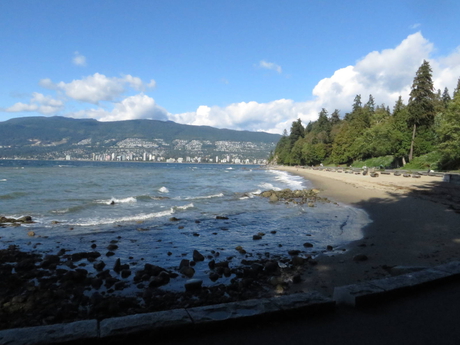 The trail going up the mountain is called Grouse Grind. There are 2830 steep steps either from natural stone or artificially made. The climb would take you 1 hour 15 minutes. You can bet that couple sportsmen would pass by you on your way (but don’t take me as if I underestimate you). These guys run Grouse Grind up as part of their workout. What is special about this trail that it is one-way only. It is forbidden to descent it. To go down you have to take a cableway for the price of 10 CAD (about 190 crowns) per person.

Before you go back continue to the top of the mountain around cableways and ski slopes of Grouse Mountain ski resort. On its top there is is a propeller where is a platform to observe the ocean, Stanley Park and skyscrapers (15 CAD, about 290 crowns). Finally, there your view doesn’t have to avoid the trees. 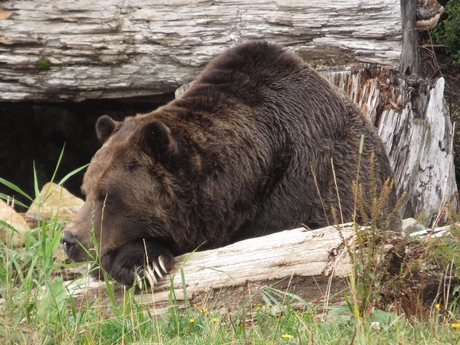 Another special thing about Grouse Mountain is Grizzly bear. You can observe these animals from safe distance from behind an electric fence. It is truly fantastic to see them from up close and to compare the size of their claws compared to the body. Of course, it is much different experience than to meet them somewhere in nature.